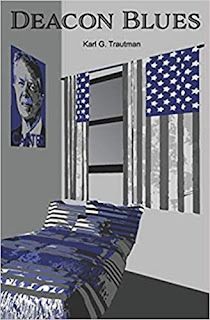 “Jolted by an arrested adolescence, Manfred Schmidt is a lonely teenager who craves for belonging and respect. His unconscious rage and forming identity are fused together at a time when a new leader is offering hope to a troubled, post-Watergate nation. He takes on Jimmy Carter as his hero, offering hope to his evolving self.”

“Trautman was born in Madison, Wisconsin and has lived in Kentucky, Virginia, Maryland, Washington D.C., Massachusetts, New Hampshire, Hawaii, Kansas and Michigan. He has also lived in Afghanistan and Ireland. He currently resides in Maine.”

1.   Experienced angst when his parents divorced.

2.   Went to some baseball games and museums.

3.   Dropped out of college without ever having kissed a girl.

I realize that as a sarcasm one of the world’s great novels could be reduced to “Old man catches huge fish. Shark eats fish.” However, that two-line synopsis implies great struggle, victory, and defeat. Does it imply that struggle is useless or that struggle itself conquers defeat, irrespective of the inevitable?

There are no such implications or questions in Deacon Blues. The struggles run to trying to gin up courage to ask the Carter campaign for a paying job and to invite a girl to a movie. The narrative focuses on Schmidt as a socially inhibited young man; one who is devoid of charm. He is no Holden Caufield snarkily thumbing his nose at imperfections of society.

It would be unduly generous to attribute Schmidt’s devotion to Carter as a metaphor for selfless devotion to good against overpowering evil. Even though Schmidt seems to see things that way, it’s ultimately just politics.

Readers who, for whatever reason, finish the novel will have waded through a morass of excruciatingly banal details.

“The laundry room was pretty basic, with industrial size washers, huge dryers, a few long tables for folding and some metal chairs for sitting.”

Ah, so that’s what chairs are for.

As a positive, Trautman’s writing style is clean, readable and error free.