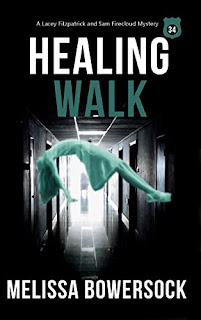 “Medium Sam Firecloud and his investigative partner, Lacey Fitzpatrick, are used to being called in to rid homes of ghosts, but are surprised when they’re asked to investigate a haunting in a hospital. The case turns out to be more difficult than usual for two reasons: the ghost doesn’t actually understand what caused the death, and the administrator of the hospital does not want the paranormal pair and their unorthodox methods connected to his facility in any way. Sam and Lacey are determined to find out the information they need to release the ghost, but can they do it before the administrator makes good on his threats to have them thrown in jail?”

“Melissa Bowersock is an eclectic, award-winning author who writes in a variety of fiction and non-fiction genres: paranormal, biography, western, action, romance, fantasy, spiritual, and satire.”

Based on my experience so far, I think the books in this series are fun, fast reads. They all involve Sam Firecloud, who has the ability to communicate with people who have died, but the spirits of these people remain trapped on this plane until some unfinished issue is resolved at which point they can move on in peace to whatever comes after this life. Sure, this basic premise and formula requires the reader to suspend disbelief, as would be required with any book that touches on the paranormal. But it isn’t that hard and then what you’re left with is an entertaining mystery that, because of the main thing Sam and his partner Lacey use to get clues, tends to take the story in different directions with more than a few unique twists and turns when compared with a typical mystery. It also opens up the possibilities as to the kinds of mysteries Sam and Lacey can tackle, sometimes solving mysteries and helping a spirit move on who has been trapped in between this life and the next for years or, as in this case, help someone who has been trapped for a relatively short time. The unique aspects of each story keep the reader guessing and engrossed in the story. This installment of the series has a few things that aren’t typical of the others, the biggest one being that some people in power obviously didn’t want the case resolved which complicated Sam and Lacey’s job. Overall, this was another fun, entertaining read.

Although this is book 34 in the Lacey Fitzpatrick and Sam Firecloud mystery series each story stands alone.