Review: The Intruders by Brett McKay 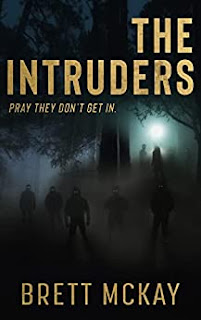 “After an unexpected turn flushes his chosen career down the toilet, Dex Sanders is struggling to make ends meet as a used car salesman. Despite the drudgery of the job, he manages to put on a brave face for his wife, Reagan, and their two boys, until the day an unsettling encounter with a stranger coincides with a mysterious package appearing on their doorstep.

Later that night, Dex and his family are abducted by a group of armed men and taken to an underground bunker, where Dex is tortured. When Dex can’t answer any of their odd questions, the strangers conclude they’ve nabbed the wrong guy, and the entire family is marked for execution.

With the clock ticking, Dex must free his family and retrieve the strange box that seems to hold the answers. But doing so means running from relentless killers, uncovering the truth behind an evil as old as time, and stopping a supernatural power that threatens the entire world.”

This book’s forward explains that the book was first available on Amazon’s Vella platform which consists of serialized novels with an episode getting released each week over an extended period of time. Each episode would include a brief author’s note which, depending on the note, tends to do one or sometimes both of two things, at least in this author’s case. One thing it can do is give a glimpse into the process of writing a novel with comments on what prompted a particular characteristic of a person in the novel, the inspiration for a strange turn the story takes, or why the author included a particular event in the novel. These notes also often provide a bit of foreshadowing, giving a bit of a clue as to where the story is headed. Since I understood the full history of why and how these notes were there, I liked them and felt they added to the story. (Without that knowledge, I suspect they would have felt quite strange.)

The story itself kept me engrossed and involved in trying to figure out what was going to happen. The story world is pretty much a place that felt like an average town in the US in contemporary times with some strange things happening that don’t have a logical explanation for either the reader or Dex, the protagonist. Over time the explanation comes out, but the adventure the reader experiences with Dex as he, his family, and some others try to work through the complications caused by these strange happenings kept me engrossed to the very end.