Review: Three in the Morning and You Don't Smoke Anymore (Insomnia Edition) by Peter J. Stavros 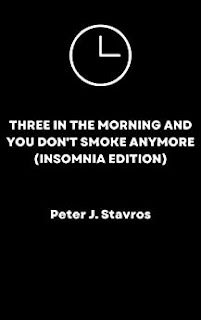 “Three in the Morning and You Don't Smoke Anymore follows a down-on-his-luck young man pursued by his past into the rabbit hole of despair and desperation before emerging renewed, and (relatively) unscathed, to face a new day. Narrated in the second person, and layered with gritty, dark humor, these nonlinear vignettes place the reader directly into the mind of the protagonist as he struggles to get his life in order.”

This is an interesting collection of short stories. Many of these have been previously published in various periodicals, so they obviously stand alone just fine. But one thing I didn’t pick up on until I was reading it, although it is now obvious from reading  the description, is that these all have the same protagonist. The stories are out of order, but touch on some of the same themes (difficulties he’s gone through and actions he’s taken in the past that he sometimes regrets for a few examples). A quick thought-provoking read.