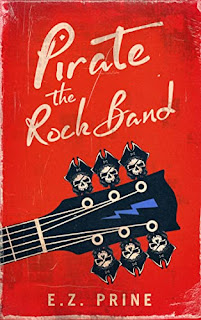 “It’s summer 1984, and a lonely rock star desperate for a more normal life battles against the forces inside and outside the band that stand in his way

Jack St James, lead singer and songwriter for hard rock band Pirate, is not your average rock star. The boys in the band may be thrilled with the rock star lifestyle, but control freak Jack doesn’t do drugs and can’t stand to be touched. After four years of non-stop touring and recording, he’s had it with the loneliness and monotony of life on the road.

His dream life is now within reach – retiring to an estate in the English countryside, making a family, and playing music for fun – but only if the band makes it through the next ten days of their sold-out American tour with no major hiccups. Then he can escape the record company and have enough money to make his dream come true.

Jack soon discovers that everyone, consciously or unconsciously, is out to foil him: his duplicitous manager (and best friend) Dunk who wants the band to keep going, the lead and bass guitarists rebelling against his iron control, a conniving and coked-up record company executive, and a beautiful and infamous groupie sowing discord within the band. Not to mention a whiny and incompetent tour bus driver named Mick.

As they each discover in turn, Jack is not one to take anyone’s shenanigans lying down. Jack’s blood is up and the game is on.”

“E.Z. (‘Easy’) Prine writes about the escapades of Pirate, a fictional eighties hard rock band out of Manchester, England. The Beatles’ appearance on the Ed Sullivan Show in 1964 sparked what has become E.Z.’s lifelong devotion to ‘classic rock’ and fascination with those luminaries we call rock stars.

The Pirate series is E.Z.’s love letter to rock ’n’ roll and personal thank you to all the artists and supporting others who brought this amazing contribution to our world. May we always rock on.”

While the obvious reader for this would be fans of rock music who came of age in the 70s and 80s, I can see it appealing to adult rock fans both older and younger than that. For the most part the band seems like the cliched wild partying, groupie loving, rock band cliché of that time. The exception is the frontman, Jack St James, who is obviously different than the cliché. It’s clear early on that he is focused on making sure this tour comes off without a hitch in order to collect on a bonus he’ll receive at the end of the tour. What isn’t clear is why that is so important to him and why it appears others are trying to interfere. Throw in a bunch of fun and interesting characters with their own aspirations and goals, a mysterious past for Jack that slowly comes to light, and the result was a fun and entertaining story that kept me trying to figure out where it was going the entire way. While some story threads resolved, this is the first book of a trilogy, so the ending does include a hint of an upcoming complication heading Jack’s way to keep you coming back for more.

Adult language and some adult-ish content. With an 80s rock band surrounded by groupies, what else would you expect?