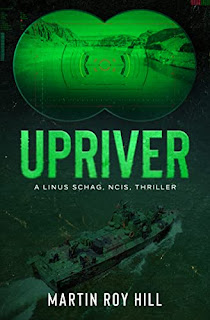 “NCIS Special Agent Linus Schag is no stranger to violence and bloodshed, but when he’s sent to Iraq to take custody of two Navy SEALs suspected of murder, he finds himself thrust into a manmade inferno as coalition forces fight to free northern Iraq from the Islamic extremist group called ISIS.

The explosion of an IED allows the SEALs, suspected of killing a fellow commando, to escape and flee up the Tigris River in a stolen Navy patrol boat. Schag pursues the SEALs in another boat assisted by an Army criminal investigator, a vengeful Iraqi interpreter, and a hostile Navy boat crew. Facing danger at each bend in the river, Schag and his companions endure ambushes, firefights, and friendly fire as he tries to discover the secret that lures the SEALs straight into the dark heart of an ISIS-made hell on earth.”

“Martin Roy Hill is the author of two national award-winning series—the Linus Schag, NCIS, thrillers and the Peter Brandt mysteries—the USCG DSF-Papa sci-fi thrillers, Eden: A Sci-Fi Novella, and a collection of short stories, DUTY. He is a former journalist and national award-winning investigative reporter for newspapers and magazines. His nonfiction work has appeared in Reader’s Digest, LIFE, Newsweek, Omni, the Los Angeles Times, and many others. His short fiction has appeared in Alfred Hitchcock Mystery Magazine, ALT HIST: The Journal of Historical Fiction and Alternate History, Nebula Rift, Mystery Weekly, Crimson Streets, and others.”

This is part of a series featuring Linus Schag (sounds like shag, the c is silent). He’s an agent for the NCIS, the internal law enforcement division of the US Navy. In this story he and his cohorts are chasing two Navy SEALs suspected of murder into an area of Iraq that is essentially at war. Needless to say, things are intense. The story has a lot of things at play to reach a resolution. Not only does Schag need to figure out where the escapees are likely to be headed beyond the obvious “upriver,” but they need to be careful to stay as under-the-radar as possible from enemy forces (ISIS in this case). The army crew tasked to assist him complicates things at times due to the normal competitiveness and friction between different branches of the US military. Then they have an Iraqi native accompanying them as a translator who makes some of their crew nervous and has goals of his own that also complicates things. The result is a unique story that keeps the reader guessing as to how or if things are going to work out.

Although part of a series, this book stands alone. Reading the prior books in the series to follow this story is not necessary.

Review is based on an advance reader copy which might not reflect the final product, so we can’t judge this area.