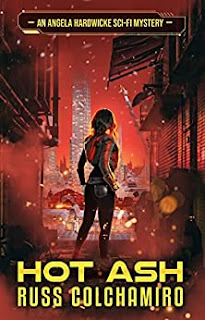 In the far future when technology has the power to repair tears in the fabric of space, private investigator Angela Hardwick is hired to resolve a case as old as civilization: infighting over family wealth.

Hot Ash uses science fiction as a backdrop for a private investigator yarn that would be as much fun to read if were set in the Pinkerton’s wild west or Raymond Chandler’s mid-twentieth century America.

The locale is a place called Eternity, which is home to people charged with preventing the universe from unravelling, but that’s not the focus of the story. It’s all about greed, jealously and betrayal. A world of ultra-high tech does not purge humanity of its deadly sins.

PI Angela Hardwick is a hard-shelled, wry-witted absentee mom with a tender side. She can kill bad guys even as she worries about her protegee losing his youthful innocence. Their relationship mirrors a parent’s angst at seeing a young-one come of age, challenge parental authority, and ultimately become the caretaker to some degree.

Lest readers focus on the SF elements, author Russ Colchamiro brings them home to the story’s theme with the presence of laptop and tablet computers and the enduring popularity of zombie movies.

The novel has the requisite plot twists, white-knuckle action and sardonic conclusion of a hard-boiled mystery, all told with consummate skill.

Hot Ash is Colchamiro’s third Angela Hardwick novel and is the only one I’ve read. It reads fine without the backstory of the first two.