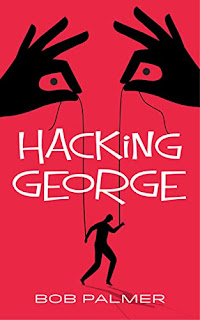 “Playing God is a dangerous game, even if you do write the rules and think they’re pretty neat.

Following a road-rage incident in which he was the victim, middle-aged cynic George Sanderson has an epiphany. He believes he has the power to influence fate and set the world to rights.

During a meticulously-planned intervention to help his friend Angela Hayworth, the two fall in love. George’s lonely existence looks set to improve. But he’s about to discover that playing games with people’s lives is fraught with danger. And when his life starts to fall apart, he’s forced to confront the frightening truth…

Someone is manipulating him. But why?

With his freedom and sanity at stake, George must fight for everything he holds dear – especially his lawn, his meat thermometer, and Angela’s perfect teeth.”

In his spare time, he's been caught in a Utah desert flash flood, set off the alarms at Area 51, and renovated a 17th century cottage with his infinitely patient author and book cover designer wife Berni Stevens.

Hacking George is his debut novel. It combines his love of the absurdity of the world we live in, of grand concepts, and the fact that even the smallest of events can spin a life in an entirely new direction.

His next novel, another instalment in the life of George, is scheduled for release in spring 2023.”

Unlike some stories, with this one I was never sure where it was going to take me. Does George really have the power he thinks he does and is this book, therefore, actually Science Fiction? Or maybe George is a touch deluded (okay, make that crazy) and things aren’t actually happening the way he perceives them. As the story progresses and the reader finds out more, my best guess as to where things were headed kept evolving, but was never quite correct until we hit the end. I thought this book had a story more unique than most with fun and interesting characters.

The author is based in the UK and thus uses UK spelling conventions and some UK slang.