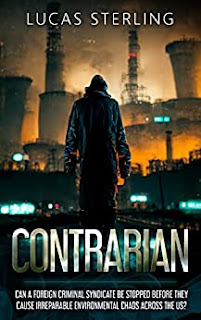 “Everyone has a secret. But some are deadlier than others…

Former Homeland Security Agent Lars Christopherson is not what he seems. Despite his impressive skills and impeccable record, Lars has a dark side few are aware off. And those who discover his secret rarely live to tell the tale…

Frederic Ulrich is a man with a mission. A skilled agent of Germany’s BND intelligence service, he is determined to right a wrong from his past, and shut down a deadly Hungarian crime ring once and for all.

When these two unlikely allies are forced to work together, they quickly uncover a sinister threat - a vast criminal conspiracy, poised to unleash environmental chaos on the United States. To stop this monstrous terror plot, they’ll have to put their differences aside and work together. But trust is hard to come by in the shadowy world of espionage and crime.

And sometimes, the only way to stop a monster is to become one…”

Lucas Sterling is the author’s pen name and information about him is limited. He currently has two other books available. One, a short story that is a satire on banking, and another, the first book featuring Lars, the protagonist of this book.

This book isn’t your typical thriller and the protagonist, Lars, isn’t typical either. Whether these qualities are positive or not is going to depend to some degree on the reader and their tastes. For me, it cut a bit both ways.

We’ll start with Lars. The series is called “Lars the Hitman” and that tells you something about Lars. While at first glance this would seem to make him the bad guy, those who fall victim of him in this story are people whose absence will make the world better. It’s hard to see this as a negative. It turns out that Lars is set for life from a financial standpoint, so the big money he receives for performing these hits is donated to charity to make the world even better.

While it isn’t unusual for a thriller to stretch the readers ability to suspend disbelief, I found that this story did it more for me than is normal. Yet I liked it enough to keep on reading, so I guess it didn’t quite cross the line, but it definitely came close. The story had a tendency to take unexpected turns that kept me guessing more than a typical thriller, which is generally good. However, those were sometimes the moments that pushed believability for me.

Last, the ending was satisfying, yet mildly disappointing. Giving the specifics is likely to be a spoiler, but I’ll say that the end has two deaths, one that the reader wouldn’t have wanted and the other that they would have, but the way it happened was a bit of a let down. In spite of having some aspects of the story that I wasn’t that thrilled with, I liked that it pushed the norms in different ways, liked the main characters, and can see myself reading about Lars’ next adventure.

A limited amount of adult language and some graphic violence.

Although this is the second book in a series reading the first book isn’t a requirement to follow this one.