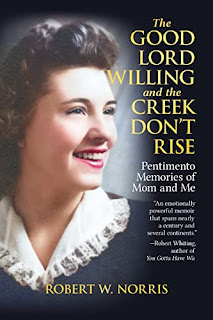 “An expatriate son's intimate memoir and tribute to his mother.

The Good Lord Willing and the Creek Don't Rise: Pentimento Memories of Mom and Me traces the trials, tribulations, and unbreakable bond of two Pacific Northwest characters. Kay Schlinkman grows up on the banks of the Columbia River in the 1930s and 1940s. She overcomes a small logging town's ostracism in the late 1950s for her divorce, excommunication by the Catholic Church for remarrying, severe criticism and rejection for defending her son's refusal to go to war, and the burden of paying off her second husband's gambling debts. In her forties, she becomes a licensed pilot and flies two summers as a forest fire spotter. After a second divorce in her fifties, she takes night classes to become qualified as a legal secretary and continues to work until she's seventy-eight.

After an idyllic childhood in the redwoods and a rebellious adolescence following his parents' divorce, Robert Norris enters the Air Force, becomes a conscientious objector to the Vietnam War, is court-martialed and goes to military prison, embraces the counterculture upon release, wanders the world in search of his identity, and eventually lands in Japan, where he finds his niche as a university professor, spends two years as the dean of students, and retires as professor emeritus.

Despite their separation by the expanse of the Pacific Ocean, Robert and Kay maintain a lifelong commitment of love, respect, and support that enriches both their lives. Kay visits Japan eight times. Robert, his wife, and Kay journey to Ireland to trace her father's roots. The Good Lord Willing provides a heart-warming example of how far a mother and son can go in maintaining their bond against great odds. A must read for all mothers and sons, and for those who've wondered what the road less traveled would've been like, had they taken that first step.”

“Robert W. Norris was born and raised in Humboldt County, California, where he played basketball in high school and junior college. In 1969, he entered the Air Force, subsequently became a conscientious objector to the Vietnam War, and served time in a military prison for refusing to fight in the war. In his twenties, he roamed across the United States, went to Europe twice, and made one journey around the world. During that time, he worked as a millhand, construction laborer, stevedore, mailman, baker, saute cook, and oil rig steward.

Norris has lived in Japan since 1983. He taught English in the Japanese university system for 24 years and is now retired. He is the author of Looking for the Summer, the story of a Vietnam War conscientious objector's adventures and search for identity on the road from Paris to Calcutta in 1977; Toraware, a novel about the obsessive relationship of three misfits from different cultural backgrounds in 1980s Kobe, Japan; Autumn Shadows in August, an hallucinogenic mid-life crisis/adventure and homage to Malcolm Lowry and Hermann Hesse; The Many Roads to Japan, a textbook used in Japanese universities; and The Good Lord Willing and the Creek Don't Rise: Pentimento Memories of Mom and Me, an autobiography and tribute to his mother. He has also written several articles on teaching English as a foreign language. He and his wife live near Fukuoka, Japan.

Whether to describe this book as an autobiography or a memoir was an interesting struggle for me. An autobiography is going to cover a person’s entire life, or at least their life up to some recent point in time. My definition of a memoir (which Wikipedia agrees with) is that a memoir focuses on a particular story or event. This book kind of meets both definitions, covering the author’s life thus far in a reasonable amount of detail like an autobiography should, but focusing on a particular aspect, in this case the story of the author’s relationship to his mother through the years.

In a way the genre label put on the book isn’t that big of a deal, especially with the two possibilities being almost the same, but I was thinking about this because I don’t read autobiographies or biographies very often, while I find myself reading and enjoying memoirs frequently. The autobiographies I do read tend to be of people who are reasonably famous and whose entire life and how they got to where they are now is of interest. As a rule, I’m not interested in reading the autobiography of a typical random person. However, I think that random person probably has some part of their life that could make a memoir well worth reading. My reason for going down this rabbit hole is that I think even if this book didn’t have that memoir-ish part about his relationship to his mother, that a strict autobiography would have still been interesting. Including the focus on his relationship with his mother through the years only made it more interesting and relatable.

The book’s description does a good job of outlining the author’s many experiences from growing up in a small town to being a conscientious objector during the Vietnam War and his eventually living in Japan, working as a university professor. It’s quite a trip and one that I think most people will find parts to relate to, parts that you’ll be glad you haven’t experienced (and will wonder how you’d handle it if you did), and possibly some lessons to apply to your own life. An excellent read.

Version read for review was an ARC (advanced readers copy), so I’m unable to gauge the final version in this regard.