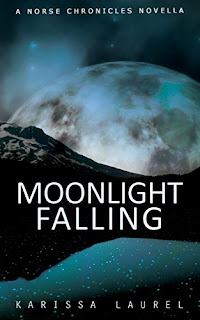 “Moonlight Falling is a prequel novella to Midnight Burning; Book One of The Norse Chronicles.

Before he moved to Alaska, Chapman ‘Mani’ Mundy promised his twin sister he would find out why shadows seemed to follow him and why ice sometimes formed in his footsteps. For nearly three years, he has failed to keep that promise, but a budding romance with co-worker, Skyla Ramirez, inspires him to renew his investigation.

If Mani has any hope for a real relationship with Skyla, there can be no secrets or mysteries between them, but as he hunts for the source of his peculiar abilities, sinister adversaries with dangerous motives will emerge from the shadows to conspire against him.”

At the beginning of Midnight Burning we met Solina Mundy, Mani’s twin sister. We got to know Mani through Solina’s memories. Moonlight Falling is Mani Mundy’s story and isn’t as heavily imbued with mythology as the rest of the series.

Mani is a gentle, thoughtful soul with some serious questions about the phenomenon that manifest around him in times of stress. He hoped that moving to Alaska could help him find answers to his ability while still seeking the action and adventure of the wilderness he needed. The problem is he gets distracted enjoying his life and work. He’s found the perfect job for himself working for Thorin Adventure Outfitters in Siqiniq. Here we meet some of the cast from the first book of “The Norse Chronicles.” However, we are introduced to a different side of their personalities, before events and conflicts happen.

I enjoyed learning about Mani and Solina’s years growing up and the type of relationship they had. It explains a lot about their bond. Mani considers Val, one of the top tour guides, his best friend and it’s easy to see they are pretty tight. Skyla is a tour guide/veteran Marine Mani has admired from afar for the last three years while in Alaska. Skyla surprised me, we got to see a softer side of her confident demeanor. It was nice watching their relationship grow. She’s running a close race for my most favorite character in this series.

The ending is shocking if this is the book you choose to read first. Having read the other two books the ending is more of a bittersweet reminder of how this series all started. Moonlight Falling could easily be read after Midnight Burning to avoid the shocking ending, however, I wouldn’t advise skipping it altogether. It’s a wonderfully written addition to the series and I am glad Ms. Laurel decided to give us Mani’s novella.

Moonlight Falling is book 0, a prequel novella, to The Norse Chronicles. Book one, Midnight Burning, and book two, Arctic Dawn, are published and available.

No significant issues in proofing or formatting and I am relatively sure I received an ARC for review purposes.