Review: The Clerk by Matt Cowper 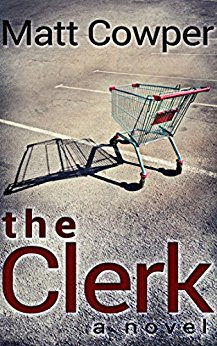 “Thomas Copeland has just turned forty years old, but unlike some men his age, he's not going to have a midlife crisis. Sure, he works at a small grocery store on the North Carolina coast, he doesn't have many friends, and he's unmarried and childless, but he's content with his simple life.

Others, however, are not so content, and they want to make sure Thomas knows it. Between a family curse, wanderlust-filled (and lust-filled) co-workers, a dangerously unhappy sister, and a vindictive ex-friend-with-benefits, Thomas finds himself in an exhausting battle to maintain his idyllic lifestyle.

Will Thomas be able to resolve – or at least survive – these dramas? Will he find love, or just tepid one-night stands? Will his boss ever notice he's cleaned the bathroom? What will he get his Secret Santa giftee? And what will be the ultimate fate of the grocery store where he works?

The Clerk is both satirical and poignant, a riveting exploration of the choices people make in the pursuit of freedom and success. You'll never look at a grocery store the same way again.”

“Matt Cowper lives on the North Carolina coast, where he gazes rapturously at beach sunsets, bikes on residential roads without spandex or a helmet, and spends too much time looking for something to watch on Netflix.

Prior to this self-publishing adventure (misadventure?), he washed dishes, delivered pizzas, worked as a VISTA, and explored New Zealand in a 1990 Toyota Corona.

He also has a degree in English, but MLA formatting and ‘genre theory have not been helpful in any areas of his life.”

Who knew that a story about a clerk in a grocery store could be fun to read. After all, there are no major conflicts, no dastardly villians, no mass shootings or personal tragedies--well there could have been, but there weren’t. At its heart, the novel is a character study of ordinary people, and an examination of what constitutes a happy life. The author delved long and deeply into the characters. In doing so, he brought me close to their lives. And isn’t the purpose of a story, to take the reader into another world?

For a first novel, this is a well written. The prose flowed, the dialog is sharp and believable, and the pages turn quickly. The only technical criticism I have relates to the frequent point of view switches. In parts, this worked as a technique to give a more complete perspective of how the characters were viewing a situation, but too often it became head-hoppingly confusing and tiring on the eye.

A few F-Bombs and sexual references that may be unsuitable for some readers.