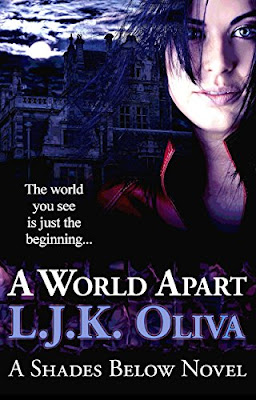 This pretty much sums the book up: "There are things that go bump in the night, Mr. MacMillian. It's my job to bump back." In these two sentences we learn that Powonia (Lena) Alan is a medium, helping stranded souls cross over, comfortable and competent in her work for ‘the other side’, fazed by very little, and certainly in much better control in such situations than PI Jesper MacMillian, who is coming at this particular case from the side of the living. Delightful encapsulation.

LJK Oliva says she writes urban fantasy and paranormal romance. That is all I can find out about her, despite her presence on Amazon, Goodreads, Facebook, Pinterest etc. The book under review is #1 in her Shades Below series. As well as things that go bump in the night, the series includes forays into vampiric and Ancient Egyptian plotlines.

This novel is a lot of fun (if one can say that of a novel about dead people). The protagonists are drawn to the same crime – a dreadful death – by the unquiet soul of the deceased (which is the ambit of Lena and her brother Cyrus) and by his parents (who engage the aforementioned MacMillian, together with a cop ex-buddy called Mark Durbin: Durbin and MacMillian have baggage). The story flitters between the living and the no-longer-alive drawing on well-established tropes, but also investing them with original thinking.

There is romance in the mix. MacMillian and Lena have chemistry from the off. But then she meets and quickly begins to date the absurdly gorgeous Durbin, giving opportunities for introspection and angst within that triangle.

As well as romance we have Romani characters (MacMillian is one) bringing their hierarchies, prejudices and empathies to play in the story.

Minor characters such as Emil and Puzzle are well fleshed-out too (and carry their own stories later in the Shades Below series). The idea that there are people in the world who have the surname ‘Zarubabbel’ on their driving licences pleases me immensely.

In Lena, Oliva draws a character who feels completely real, apart from her ability to see dead people. I, too, felt I would finally be a grownup when I bought my first new cooker. (I turned out to be wrong. So is Lena.) Lena runs a tea shop. She is an expert on tea, treating each infusion as a little ritual. Lena’s inner monologue (through which much of the book is unfolded) is consistently believable and interesting.

However, one doesn’t read the book for the tea infusion recipes. This is a fast-paced whodunit incorporating the spirit world. The interactions between the characters (living and not so much) keep the pace going lickety-split throughout. The episode of Jimmy-as-poltergeist was particularly delightful.

There is a slightly irritating tic involving short hyphens and missing spaces. Then there are the occasional malapropisms: ‘caliper’ for ‘calibre’; ‘bend’ for ‘bent’; ‘tram’ for ‘pram’, ‘banquets’ for ‘banquettes’. There are some other odd word choices which provide a momentary puzzlement before one decides it doesn’t matter and plunges back into the story. For example, I have no idea what ‘in the Veil’ refers to, nor how Powonia belongs ‘in hospice’.

I became a little irked by the number of men in the book whose names began with D. (Especially when I needed to refer back when I came to write the review.) Durbin, Darius and Daniel is two Ds too many: there are 25 other letters in the alphabet…

Thanks for taking the time to review this! I'm so glad you enjoyed it. And I promise I'm not trying to be enigmatic on purpose, lol. If you're interested in learning more about me, I'm pretty much an open book on my website, ljkolivabooks.com