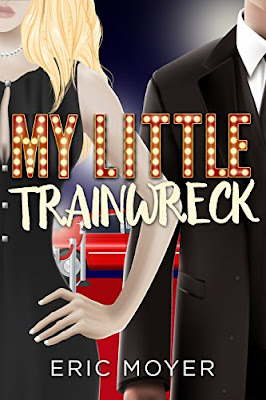 “Laura Summer is desperate for a comeback. Now twenty-two, the former child star just landed the leading role in a potential blockbuster film. She’s anxious to jumpstart her failing career and clean up her public image. Scott Simmons needs money. His dream of owning the neighborhood bar seems far-fetched until Laura’s film production rolls into town and offers Scott a large sum of money to keep an eye on her. All he has to do is follow her everywhere she goes and keep her out of trouble. How difficult could it be? Scott’s willing to find out if he gets paid in the end. But there’s a catch. Laura’s the most notorious party girl in Hollywood. Keeping her on track will take everything he’s got, maybe even his heart, but falling in love with a trainwreck was never part of the deal.”

“Eric Moyer is an author and filmmaker… He is also the creator of the online children's series, Wilber the Cat. In 2015, he released the book, Back to Ocean City, a collection of short stories and screenplay excerpts. In 2016, he released My Little Trainwreck, an adaptation of one of his screenplays.”

We’ve all seen the tabloid headlines and watched as promising child stars grow up without boundaries and their lives spiral out of control. Laura Summer is one of these cases. Thankfully, at twenty-two she decides to turn her life around from the jet-setting-party-girl lifestyle and get back into serious acting. The problem is she’s a spoiled little rich girl who likes to get her way and she’s not above throwing a tantrum to insure she gets it. The movie’s producer, Victor Cashman, is an old family friend, so he knows what he’s in for. To make sure Laura behaves he hires a bodyguard to keep an eye on her at all times and to make sure she shows up on time for rehearsals and filming.

Scott Simmons is the manager of the local bar where the movie is being filmed. He wants to purchase the bar, however, he is low on funds. After being turned down at the bank for a loan he was counting on, he seizes the opportunity to become Laura’s bodyguard during the filming. It should be quick, easy cash, and basically a babysitting/chauffer job, right?

The plot keeps a steady pace as we gain insight into why Laura turned out to be the spoiled brat she is. She is difficult to like and I had a hard time identifying with her. Scott is a sweet, mild-mannered sort of man who lacks a backbone. He is pretty boring, but takes his job seriously and goes way beyond the call of duty, because he falls for Laura. The director, Jimmy Corn, is flat-out crazy. He generally directs blockbuster action films. He’s a bit out of his element directing a Romantic Chick-Lit film and it shows. Victor earns his pay by keeping Jimmy calm and focused.

There are unexpected twists and on set hijinks that help keep the pages turning. I found the story a little clichéd but entertaining. Scott’s sister, Alison, and Laura’s brother, Ricky, added a lot of personality to the book. The ending redeemed the characters for me and made the story worth reading.

There is some violence and some bed hopping. Nothing too graphic.

I came across a small number of proofing errors.