Review: The State Of Wyoming: Episode 1 -- LARAMIE by Gillian Will 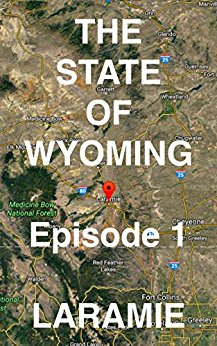 It’s a book for people who like TV. A serial novel structured like a television show, with individual complete episodes that each also contribute to the ongoing story.

In 2011, the Obama Administration embarrassed itself by mistaking Colorado for Wyoming on the map of a speaking tour in western states. Voila, the Fifty States Program!--fifty new federal patronage jobs, one for each state, all housed in cubicles at the Eisenhower Executive Office Building adjacent to the White House.

The millennials in these jobs call each other by the name of their states, and none of them are exactly what you’d call on the ball. Wyoming--that’s our man Elliot Vance-- could qualify for the slacker Olympics. He’s the grand-nephew of former Secretary of State Cyrus Vance, but prior to being given a States job by his wealthy father he got kicked out of an English lit Ph.D. program for insisting on doing his dissertation on 1950s pulp author F. Bob Goddard. Elliot dates a WASP-American princess who’s pushing for marriage, and his two best friends are Delaware and Nebraska. His nemesis is Tara Travis, the slinky blonde Republican aide to Wyoming congressman Bull Wheeler.

In Episode 1 Elliot is blackmailed by Tara into flying to Laramie to do some actual work. It’s the first time he’s ever been to The State of Wyoming.”

Hmm. Not a lot I can tell you about Gillian Will other than she (or the person who uses that name to write these books) has written 13 “episodes” in this series. That may be all she plans to write (in this series or maybe under this name) based on the timing of the releases thus far. Each of the 13 is named after a town in Wyoming. While Wyoming has a lot less towns than most states, she hasn’t yet written an episode revolving around Evanston, Torrington, Alpine, or Kemmerer to name a few that spring to mind.

The premise for this series is intriguing and, as I’d expect from satire, amusing. The story elicited a few smiles and smirks as well. But I was never sure who was telling the story. It seemed like a lot of it was breaking that rule about stories (the one about showing, not telling) and I was never even sure who was telling the story. I guess a narrator, but he, she, or it referred to themselves multiple times as “we.” So maybe the narrator is a they? In any case, he, she, it, or they are omniscient, an approach I’m not fond of, but which may be okay for you.