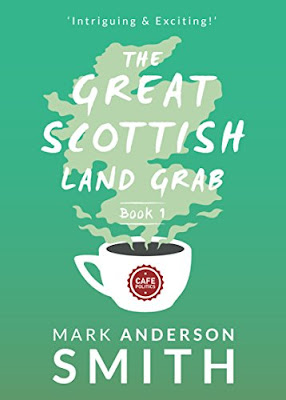 “Robert Castle is fighting to save the UK Union when an incident while walking in the Scottish Highlands turns his life upside down.

A search for justice leads Robert to look deep into Scotland's history and what he finds will change not just his life, but the direction of a nation.

Serialized over three books during the summer of 2014, this is Book 1 of The Great Scottish Land Grab.”

“Born in Aberdeen, raised in the Shetland Isles and currently living in Central Scotland, Mark Anderson Smith has seen Scotland transformed since oil was discovered under the North Sea. Having lived in England for ten years and worked from 1999 till 2001 in Central Asia he has a unique perspective on what it means to be a Scot at home and abroad. His two years in Central Asia were spent in the Republic of Tajikistan, a new country that declared independence from the Soviet Union in 1991. Instead of resulting in freedom, independence led to a five year civil war - the consequences of which can still be found today. Yet despite seeing the destructive power of a country that tried to tear itself apart, he also saw people willing to forgive, willing to work together, willing to fight for the future - without resorting to violence. Mark enjoys walking Scotland's mountains and climbing.”

I found myself in equal parts enthralled and appalled by this novel. The story revolves around the recent vote for Scottish Independence (pre-Brexit), when every eligible Scottish national had the option to cast a vote to stay or to leave the United Kingdom (they voted to stay). The for and against arguments are true to life as presented, but the outcome and the reasons for the outcome are fictional. That makes this Alternative History, which is a “hot” genre right now (High Castle, e.t.c.)--I recommend that the author change genres on Amazon to get more attention.

So, what was enthralling: By presenting local politics, with local issues, and locally motivated campaigners in a fictional setting, the author succeeded in cutting through the gloss of politics as a game played by the rich and influential. Sure, the outcomes and mechanisms were a little far-fetched and idealistic, but this is fiction and so reality can be bent. And that is the strength of this novel, and the main message--ordinary people really can force change. When circumstances outside of his control but integral to the unfairness inherent within the current political system compelled the main character to act, even at significant personal cost, I found Robert Castle, believable and empathetic.

Yet the pedantic manner in which he treated his family and those who tried their best to help him rasped like sandpaper. This dichotomy didn’t endear me to Mr. Castle and it weakened the premise because a clear-eyed understanding of the main character is, IMO, essential. Whether I am rooting for or against, I need to believe that his actions make sense. Unfortunately, many of Robert’s actions fitted him like a hair shirt, and irritated me just as much.

The idea of land redistribution (hence the land grab) seemed silly, not because of the concept (which may be silly or not), but because of the size of the lots and the naive ideas of what the new landowners would do with the gift from their magnanimous government, not to mention the unrealistic ease with which landowners ceded their rights. Returning Scotland to a feudal system of small holdings managed under military oversight seems an underthought solution to the problems of a sophisticated Western society like Scotland.

And finally, as someone who has both received and who still knows people who rely on government assistance, I can assure Mr Castle that the vast majority of those people aren’t lolly-gagging losers.

I think my ruffled feathers have much to do with the story being placed in near times with current political realities (such as Brexit) referenced as part of the story arc. So, I couldn’t fully detach my opinions and knowledge of current affairs from the proposed fictional reality. It seems to me that for Mr. Smith’s ideas to appeal, his proposed alternative needs to be more workable and more attractive than the status quo. Or else, what’s the point?