Review: For the Love of Katie by Erica Lucke Dean

This is the second half of a doubleshot review. If you missed it, BigAl gave his thoughts on the same book this morning. 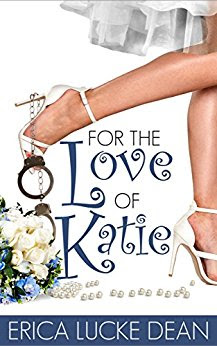 “Newlywed Katie Maxwell is ready to settle down and leave her amateur detective days behind. But when the veil of secrecy surrounding her husband’s latest project takes them to Europe, her penchant for sleuthing lands her in some serious hot foreign water.

Katie will need to think quickly to talk her way out of handcuffs and a Parisian jail cell. Too bad she doesn't speak French.”

Erica Lucke Dean: “After walking away from her career as a business banker to pursue writing full-time, Erica moved from the hustle and bustle of the big city to a small tourist town in the North Georgia Mountains where she lives in a 90-year-old haunted farmhouse with her workaholic husband, her 180lb lap dog, and at least one ghost.

When she's not busy writing or tending to her collection of crazy chickens, diabolical ducks, and a quintet of piglets, hell bent on having her for dinner, she's either reading bad fan fiction or singing karaoke in the local pub. Much like the main character in her first book, To Katie With Love, Erica is a magnet for disaster, and has been known to trip on air while walking across flat surfaces.
How she's managed to survive this long is one of life's great mysteries.”

Katie, who is now four months pregnant, gets arrested in Paris trying to spy on her husband, Cooper Maxwell, at his latest film shoot.  Unfortunately she isn’t carrying any ID to prove who she is. It could happen! At the end of To Katie With Love, the prior book in this series, the book skipped forward a year. While Katie is trying to convince the Paris police inspector, Henri Gaspard, who she is, the story jumps back, using this book to fill in the gap.

The hijinks and miscommunications at work are hysterical. All of Ms. Dean’s secondary character interactions are just as enjoyable as her main characters. They always add depth to the scenes. Vivian Allen, Cooper’s publicist, is a thorn in Katie’s side, and Cooper seems oblivious to Vivian’s advancements, which gives Katie the opportunity to rely on her own devices. We are then given the privilege of getting to know Katie’s parents, I think Katie takes after her mom a little more than she’s willing to admit. There is also no denying Katie is a gem in her father’s eyes. Cooper’s parents were both gems. Lizzie, Cooper’s mom, is excellent at reading people and knows how to get what she wants. Colin, Cooper’s father, is now enjoying his life since retiring from Her Majesty’s Diplomatic Service. One would expect him to be a stuffy old Englishman, which is far from the truth. They are both delightful and will be wonderful grandparents. And I’m not just saying that because they have chickens and goats on their estate in England.

The storyline moves at a good pace with a couple wrenches thrown in to complicate things. A lot of For the Love of Katie is a comedy of errors that were no fault of her own. Then there are memorable scenes that are Katie’s fault, these all involved too many adult beverages. The ending is perfect as Cooper defines being the perfect man by accepting and relishing Katie for who she is. For the Love of Katie is an enchanting read I highly recommend.

For the Love of Katie is book two in The Katie Chronicles. This book can be read as a standalone.

I found no significant proofing errors in the Advanced Readers Copy I received.

Thank you for reading and reviewing my book twice today! Much appreciated. You guys rock!

I thoroughly enjoyed this story. I can't wait for the baby to be born. Katie only has five more months before the little bundle of joy arrives. Can you manage that? Bwahahahahahaaa! Please say "Yes"

I have so many ideas for the next one...