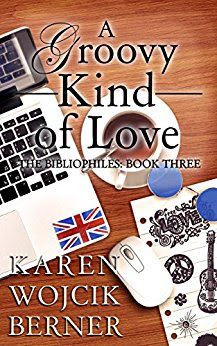 “A Groovy Kind of Love is the third and final installment of Karen Wojcik Berner’s Bibliophiles series. Written as stand-alone novels, each book focuses on one or two members of a fictional suburban classics book club, revealing their personal stories while the group explores tales spun by the masters.”

“After placating to his father’s demands that he play Little League baseball and major in computer programming in college rather than his beloved English literature, Thaddeus assumed that several years into his career, he would finally get some peace and quiet.

Then he met Spring Pearson, the younger, free-spirited daughter of Hippie parents, at a book club meeting. Instantly smitten, Thaddeus finally worked up the courage to ask Spring out. But will an old college pinkie-swear promise Spring made fifteen years ago get in the way of this bibliophilic romance?”

An award winning magazine writer and editor, this is Karen Wojcik Berner’s third novel. The other two (also part of the Bibliophiles series) are Whisper to a Scream and Until My Soul Gets it Right. Also included in this series is the short story, A Bibliophile Christmas.

Since this is the final book planned for this series (yes, I’m disappointed about that), it makes sense to first consider the series as a whole. I’ve loved the concept from the start. I’d describe the books as “loosely coupled,” in that they share characters (the members of a classics book club), but unlike a typical series where each book stands alone and shares characters (think in terms of a mystery or detective series), the Bibliophiles avoids feeling samey. (I know, not a real word, so sue me.) Yet each book is enough alike that they should all appeal to the same groups of readers. One obvious group is avid readers who have at least one thing in common to help them relate with the protagonist of each book.

This installment focuses on Thaddeus, a straight-laced Anglophile, and Spring, the daughter of hippie parents. While more conventional than her parents, the free-spirited Spring is still influenced by her upbringing enough to be much different than Thaddeus. It’s a classic case of opposites attracting, with each learning from the other and in the process tempering their more extreme tendencies for the better. There are also some lessons in how our childhood influences the adults we eventually become, whether from embracing or rebelling against our roots.

Although part of a series, each book in the series stands alone.

Added for Reprise Review: A Groovy Kind of Love was a nominee in the Women’s Fiction category for B&P 2015 Readers' Choice Awards. Original review ran January 12, 2015

Thanks so much for featuring Groovy again!