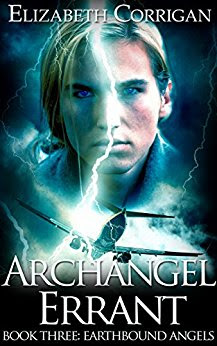 “Divine intervention isn't all it's cracked up to be.

Gabriel didn’t expect his return to Heaven to be filled with trumpets and celebration, but he thought he would do more than sit at Michael’s side, listening to endless catalogs of unfulfilled prayers. He’s tried blending into every aspect of Heavenly life, but he can’t help but feel that the constantly praying Faithful and flower-dispensing Handmaidens lack the motivation to do any true good in the world. Some days, he longs for nothing more than to return to Earth and tell his beloved Cassia how he feels about her.

When Heaven is suddenly attacked, all the angels become trapped in their own nightmares. With Michael gone on an angelic mission, Gabriel must rally the remaining seraphim to rouse the sleeping angels and discover who seeks to take the agents of Heaven out of the celestial battle. All fingers point to Bedlam, but Gabriel can’t believe the ex-demon would threaten his salvation so soon after gaining it.

With few people he trusts, Gabriel must rely on all the lessons he learned on Earth to save Heaven, Bedlam, and maybe even himself.”

To learn more about Ms. Corrigan please visit her on Facebook.

Appraisal:
This is Gabriel's book. Archangel Errant is told through three Points-Of-View, which are clearly marked in the chapter headings: Gabriel, Michael, and Bedlam. Gabriel is still not sure where he fits in on earth or in heaven. We are given a back history of Cassia and his relationship through the millennia. It’s insightful to see how clueless Gabriel has been with Cassia and not surprising Bedlam asked him to stay away from her.
I found it easy to be swept away by the dynamics of the relationships of all the characters involved. The heavenly hierarchy and politics weigh heavily in this story as we are given insight into the past and present. This may cause some readers to think parts of the plot read more slowly, but I found it enthralling.
When Michael goes down to earth to assist Cassia, heaven is mysteriously attacked and all evidence points to Bedlam as the culprit. With Gabriel in charge he scrambles to figure out what happened, who is responsible, and set things right again. In the process Gabriel is able to sort out his purpose.
The most surprising part of the whole story is Michael’s trip to earth to assist Cassia. Michael has always viewed Cassia as an evil entity even though she has never chosen to do evil. A lot is revealed in Cassia’s talks with Michael as well as the reason she believes she was chosen by God to be an immortal human.
I found Archangel Errant to be an excellent addition to the Earthbound Angels series and thoroughly enjoyed it. As always Bedlam is my favorite character. Who doesn’t need a little chaos in their lives to stir things up once in a while? The fact that he is an angel now just makes it that much more intriguing. I’m looking forward to seeing who is next. I suspected Michael, but we learned a lot about him in this story. Is Ms. Corrigan going to make me say, “I only thought I knew Michael?”

Archangel Errant is book three in Ms. Corrigan’s Earthbound Angels series. I would highly recommend reading this series starting with book one, Oracle of Philadelphia. There are also a few F-bombs, but only four.