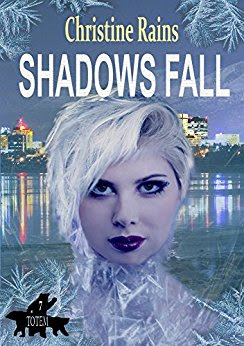 “Ametta Dorn is hosting her first family Thanksgiving feast. Everything must be flawless from the appetizers to the desserts. But the totem quest weighs heavily on her and her family. If she can’t even fold a perfect crane napkin, then how can she help her family find the next token?

That totem is closer than any of them realize. The Shadowmen have opened a door to their world, and they’ve targeted Ametta as the weak link in her family. She will show everyone she's just as capable as they are. Except her daring might be the very thing that loses not only the raven totem but also her life.”

Ametta is a perfectionist in all areas of her life, and even though she has obtained a token of the totem, she still feels a need to prove herself. Which lead her into unforeseen trouble. Events leading up to Thanksgiving seem to be targeting Ametta specifically. The Shadowmen have selected her as the weakest link in her family.

The story moves fast with shocking revelations exposed. Truth and answers are unclear, even for Sedge. This Thanksgiving will forever be marked by devastation instead of the Dorn family’s perfectly flawless Thanksgiving celebration. Shadows Fall is an exciting and emotional read. You won’t want to miss this addition to the TOTEM series.

Shadow Falls is book seven in Ms. Rains TOTEM series of nine novellas. It’s important to read this series in order as the story develops.