Review: Orb Stones and Geoglyphs: A Writer's Journey by Daniel A. Smith 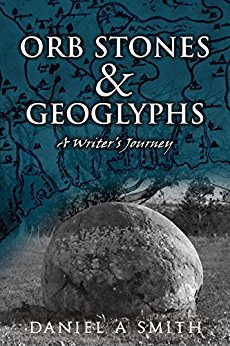 “A soulful mix of geology, writing, rock and roll, and lost ancient nations from the author of the award winning historical novel, Storykeeper. A thought-provoking account of a ten-year search for mystical orbs, mysterious earthworks, and forgotten history will inspire the storyteller in all of us to begin their own journey.”

“Daniel grew up in Arkansas. In his youth, he began working for his father riding in a Studebaker pick-up truck around the state, servicing refrigeration units in tourist courts and small country stores. Years later after leaving the touring concert world as chief sound engineer for an eclectic range of musical artists, he traveled those same Arkansas back roads designing and installing permanent sound systems. For the first time, Daniel really began to notice the surprising number of ancient earthworks that covered the state.

He realized that he like everyone else he knew had no idea who built them, when, or why. What began as an observation grew to a driving curiosity to research historical documents and the state's vast archeological findings. The untold stories and lost history all around him inspired Daniel's debut novel, Storykeeper.”

More than once I’ve compared an author talking about how their book came to be as like a tour of the sausage factory. At least in a venue aimed at readers this is as likely to turn them off sausages as it is to entertain or inspire. (In a venue aimed at fellow authors, writers, or those specifically interested in the writing process, the reaction is obviously different.)

I don’t feel this way about Orb Stones and Geoglyphs. When I tried to figure out why the conclusion I came to is that while the story told here is a true story of how the author’s first novel came to be, the novel wasn’t the point of the experience, but one of the results. The writing isn’t the focus, instead the important parts are the archaeological curiosities the author observed and the history he learned about due to digging deeper. More an adventure tale than a chronicle of schooling. Explaining much more than this will spoil the story, so I’ll finish by saying that those who like a good mystery and are interested in the history of North America should enjoy this quick read.