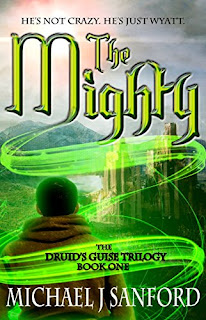 Fifteen-year-old Wyatt has been sent to a treatment center for ’disturbed youth.’ No one understands him. He wants nothing more than to escape from it all.

Through a magic he doesn't understand, he finds himself in Hagion, a realm of fantastical creatures and immense wonder. He quickly finds himself in the company of a runaway warrior and two Children--a strange race of underground creatures that seem forever joyful. They claim Wyatt is a Druid, a powerful figure of myth and legend, sent to restore peace to all of the Realms. He doesn't bother correcting them.

Finally, he can be the hero he's always dreamed of.

But claiming to be a hero and actually being a hero are two different things. And it's a lesson Wyatt may have to pay dearly for.”

“Michael has always been a prisoner to his imagination. His childhood was spent running through the forest, pretending to be a gallant warrior saving the countryside from certain destruction. Or he was a ferocious beast terrorizing the very same countryside. There is always a story spinning through his mind. As an adult, writing has become the only way to keep his head from exploding.

He lives in upstate New York with his loving wife and two cats. If he's not writing, he's likely reading, weightlifting, or forcing his players into difficult situations from behind his Dungeon Master's screen. He is a storyteller first and a writer second.”

It is clear from the beginning that fifteen year-old Wyatt doesn’t fit in. He’s a bit overweight, nerdy type of boy who considers himself a genius. He also likes to pretend he knows magic and spends a lot of time in imaginary games where he is wizard and a hero. After a rather difficult day he is confined to his room where he pulls out a pendant, given to him by his grandmother. It’s a piece of wood imbedded with a jade stone that he always wears. Studying the stone closely it starts to warm and spark, suddenly Wyatt is whisked off to an alternate reality.

The alternate world is vastly different from earth and Mr. Sanford does a good job painting the scenery and the creatures which inhabit it. I found it easy to insert myself in this new realm as Wyatt encounters new beings and he is able to communicate with them. The inhabitants are diverse and it was easy to accept them at face value. When they see Wyatt’s pendant they drop to their knees and start calling him Master. He’s told he carries a symbol of the Druid, which were exterminated years ago, and he must be there to rid their world of the corruption the Regency has spread. Thus the quest begins.

Unfortunately, Wyatt seems to have no control over his comings and goings. He is whisked back and forth between realms until shadows start following him back home. The adventure back on Hagion was exciting and engaging as our small band of heroes travel across new territories, some fraught with dangers. I enjoyed the story up till the ending. The ending killed the magic for me and I am not sure it can be resurrected.

The Mighty is book one of The Druid's Guise Trilogy

Small number of proofing errors such as missing or wrong words.