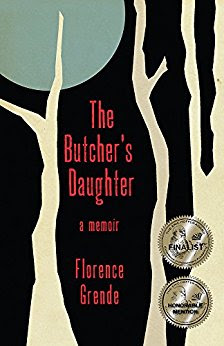 “What was it like to hide with your family in the dense forests of Poland for two long years, as Mameh did, living in a hole in the ground, while being alert, always alert, to the sounds of Nazis and their dogs?

How was it to be both hunter and hunted, as Tateh was, taking up arms, bartering for and stealing food, fighting for another day of life, wounded and recovering, while protecting others hiding in the forest--the old, the infirm, the children?

And what was it like for the narrator, after the war, child of these two people, Mameh and Tateh, who held their stories close? And each of them haunted by the dead?

The Butcher's Daughter lays flesh on the bones of their stories. It is a book meant for all adults and young adults interested in:  the immigrant experience of a family across generations, coming of age in the Bronx, Eastern European Jewish culture, survival and partisan fighting in the frigid and dangerous woods of WWII Eastern Poland, living with and transmitting trauma, and for those just interested in a compelling story.”

“Florence Grende was born in American Occupied Germany to Holocaust survivor parents and grew up in the Bronx. As a young woman, she earned a Master of Social Work degree, and later, at age sixty, a Master of Fine Arts in creative writing. The Butcher's Daughter is her debut book. She has also pursued careers first as a therapist, then an AT&T union worker, and a mixed-media artist.”

I imagine memoir readers like reading about the experiences of others for different reasons. At least I know the appeal of a memoir can vary for me, depending on the author and what they have to say. In the case of The Butcher’s Daughter I found a few things that appealed to me.

One is the obvious and the author’s apparent primary goal, getting an understanding of what the author’s parents went through as Jewish people hiding from the Nazis and how that experience impacted the next generation. But I also found comparing the author’s experience to my own to be an interesting mental exercise. While a few years younger and living in a different area, I was impacted by many of the same historical events and cultural shifts. This helped me relate to the events on a more personal level.

Overall an enjoyable read. It should appeal to those who like to read the stories of “real” people (as opposed to the rich and/or famous).