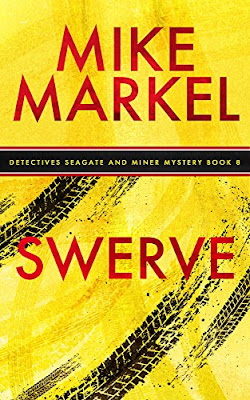 “The Central Montana State community has waited a year to learn whether Syclone Systems, a maker of self-driving car technology, will enter into a long-term R&D partnership with the university. At a live demo on campus, where the company is expected to announce its decision, its man on campus, Bryan Orville, is run down by one of his experimental cars. Whoever altered the car’s computer code to kill him also erased all the forensic evidence. Because Orville had some nasty habits--fooling around with grad students, stealing promising research ideas, and publicly humiliating professors who didn’t meet his standards--Seagate and Miner are swamped with suspects. When a second body turns up, and then someone hacks Syclone and threatens to put them out of business, the detectives devise a plan to lure the killer out of hiding with a phony reward for solving the hack. But the killer knows there is much more money to be made selling the company’s trade secrets on the dark web. Besides, the killer is quite busy planning one last murder.”

“Mike Markel writes the Detectives Seagate and Miner Mystery series, which is set in the fictional small city of Rawlings, Montana, home of Central Montana State University. That university is somewhat like Boise State University, where Mike taught writing, but in Rawlings the weather is colder, the football team less successful, and the murder rate much, much higher.

Mike lives with his wife in Boise.”

I’ve read several of the Seagate and Miner book. I’ve liked all of them, but realized that my main reasons for liking each book has varied a lot. That’s a good thing. In some installments, in addition to the mystery at the heart of every book, I’ve been focused on Seagate and Miner’s relationship, how their flaws and idiosyncrasies tend to offset each other, making them a strong team. In other books, my focus is on something different. For Swerve that was the concept of self-driving cars and what some of the complications of these might turn out to be. But, as always, the mystery kept me guessing and Seagate and Miner kept me entertained as I tried to solve the case with them.

While this is the eighth book in the Seagate and Miner Mystery series this can be read as a standalone.

Thank you very much, Al, for your generous review--and for all of your support for the indie community. We do appreciate it.