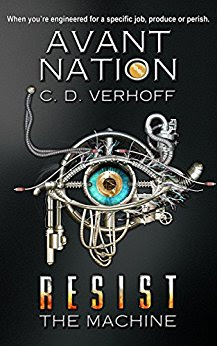 “When the government owns the gene pool, what could possibly go wrong? According to the leaders of Avantica, absolutely nothing. If in doubt, just look at the statistics. Their genetically engineered citizens enjoy the highest standard of living in the world. Crime and disease are nearly non-existent. Healthcare and housing are totally free. Why would anyone ever want to leave?

Meet 16-year-old Clara Spinner. By design she is supposed to be compassionate, serious to a fault, and content with her work, but someone at the population factory messed up. How else can she explain her rebellious streak, ability to appreciate a good joke, and the fact that she detests her first job assignment? Hiding her true nature is a daily battle and coworkers are getting suspicious. So when the military shows up, looking for someone with her skill set, Clara 'volunteers'. Fitting in with ruthless soldiers isn't easy, but that's the least of her worries after they land in a place opposed to everything Avantica stands for. Hearts and loyalties will be tested. Dystopian sci-fi with a touch of romance. Recommended for older teens and adults.”

C.D. Verhoff is a speculative fiction author from Ohio. For more, visit her blog.

The future world this story is set in is an interesting one. It makes you consider what it means to be human and the possibility that close to perfection might not be so good. It’s an interesting premise and I enjoyed watching Clara struggle as she tried to resolve her feelings when they disagreed with what she’d been told was true. Although the book could use an additional round of proofreading to catch the things that have slipped through which shouldn’t have, if you’re not sensitive to a few too many typos and enjoy young adult dystopian, give this a try.

This is the first volume of the Avant Nation series.

More proofing and copyediting misses than I find acceptable.

Email ThisBlogThis!Share to TwitterShare to FacebookShare to Pinterest
Labels: 3 star, Dystopian, YA