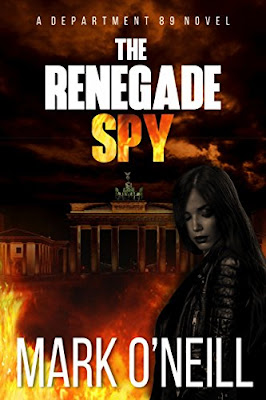 “The German chancellor, Claudia Meyer, is riding a wave of popularity at home. But she also has her enemies, and one of them has hired an assassin - nicknamed "The Scorpion" - for twenty million Euros to kill her.

Little does the chancellor know that the Scorpion is relentless. He is ruthless, and he is extremely good at his job. The government has no clue what the Scorpion looks like and how he will strike. Not even her bodyguards are a guarantee of safety. All they know is that the Scorpion leaves a trail of dead bodies in his wake. Captain Sophie Decker of German Intelligence rapidly becomes Meyer's only chance of ultimate survival, along with her colleague, Lieutenant Wolfgang Schmitz.

Decker and Schmitz are given an order - stop the Scorpion by any means necessary - before the Scorpion gets to the chancellor.”

“Mark is a 40-something Scotsman, now living the expatriate lifestyle in Würzburg, Germany. He is married to a beautiful German woman, and is part-owner to a gorgeous but crazy dog called Schlumpf.”

There is a lot to like about this book. The overall story is good. The characters are okay and the author puts words together well enough.

The problem is when you get into the details of the story there are things that happen or the characters do that aren’t credible. For example, Captain Decker doing things that are of questionable legality. Pushing the limits some of the time might be believable, but she did this too much for me to buy into it.

Then when the bad guy in this story, The Scorpion, realizes that he’s not going to get paid the remainder of the money for what he was hired to do, there is no way any sane person is going to think he’d continue due to “professional pride.” My bull-pucky indicator went into full alert.

At times, as readers, we have to suspend disbelief about things that we know aren’t true. But there are limits and I found myself hitting against those limits way too often while reading The Renegade Spy.

A moderate number of proofing misses. Enough to notice, especially in a book this short, but not enough to decrease the rating.