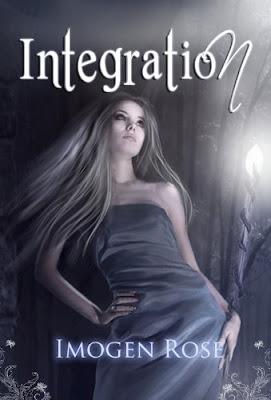 The second book in Rose’s Bonfire Academy series, Integration continues the story of Faustine, Quinn, Cordelia, and many of the other characters from Initiation as Faustine completes her next year at the Bonfire Academy, a boarding school in the Swiss Alps that trains teen paranormals to use and control their special powers. It’s just like high school, only worse.

Globetrotter Imogen Rose is Swedish by birth, went to college in London (where she received a PhD in immunology), and is now a Jersey girl. After her eight-year-old daughter insisted she write down her stories, Rose wrote the first of her Portal Chronicles series and decided to let it out into the world. The response was so positive that she’s continued with three books in the series. Plans at least one more, and started two other series. For more, visit Rose’s website.

If you’d told me two years ago that I’d be reading books that were not only young adult, but full of paranormal characters, I’d have called you crazy. But I got sucked in by reading the first of Imogen Rose’s Portal series, which convinced me that young adult didn’t mean a grandparent was too old to enjoy it. It snuck in a small dose of the paranormal, so I was open to giving it a try when she started a series that was definitely paranormal. Now I’m hooked. Integration has only set the hook deeper.

The Bonfire Academy series is a prequel to The Bonfire Chronicles, which currently has only one book, Faustine. Integration bridges the time from the end of Initiation to the start of Faustine. The focus is largely on Cordelia, although many of the students are returning, including one in particular who generates much of the book’s conflict. Some new characters also make their first appearances and shake things up.

I’m always impressed by Rose’s ability to introduce and integrate new characters in an ongoing series and to craft an engrossing story, which is aptly demonstrated here. But what struck me as I was reflecting on Integration was that she’s done a first class job of world building without me realizing it. When I think of a typical book in the fantasy or science fiction genres, I expect a large part of that will be describing a world that is much different than anything in real life, while having enough aspects of the real world for us to be able to relate. While Rose’s world exists on the same planet we live on and sometimes her characters visit that world, I realized that what she has done with the Bonfire Academy series is created a world that is just as foreign to the world I live in as a story taking place on Planet X. None of the characters are 100% human. Their emotions, reactions, and powers are, at most, sometimes human-like, but more often not. Maybe the reason it took me this long to realize this is that their goals aren’t that much different from those of a human teenager: survive school, have fun, and find someone to hook up with.

Now I’m left looking forward to the next Imogen Rose book, and wondering what it will be. Another installment in the Portal series is most likely. But The Bonfire Chronicles has only one book thus far and it isn’t clear whether this will be the last of The Bonfire Academy series or not. Whatever comes next, I hope it won’t be long, or I may have to give in and read Twilight.

Recommend reading Initiation, the first in the series, prior to reading Integration.