Review: The Witch of Bergen by Meriam Wilhelm 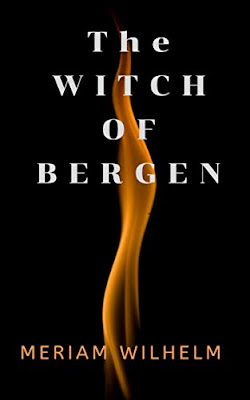 “An innocent trip to a second hand shop launches Carynn Cinnamon on a life altering adventure. Whisking her back in time to the 1600's, Carynn lands in the arms of a handsome witch who claims to be her husband. Is her heritage really tied to this man? Has she discovered her own wrinkle in time or is fate playing a cruel prank on this young witch? And what of his claim that the future of magic and witches everywhere depends on her next move? If she agrees to travel back in time again will she lose her heart or her life in the process?”

When she retired, something magical happened. Wilhelm was bitten by the writing bug and her chosen genre was the paranormal world, specifically of the witchy persuasion… A world traveler, Wilhelm has researched the history and culture of witchcraft and found inspiration as far away as Bergen, Norway and as close as her home town. A Redondo Beach, California resident, she decided there was no better location for her family of witches to reside than the beaches outside her own front door.”

Carynn Cinnamon is a novice witch who hasn’t come into her full witch powers. Losing both her parents when she was nine set learning her witchy skills back. Lately she’s been busy with mundane young adult stuff like finishing college and starting her own travel agency named Mystical Travel Tours. She has settled in Redondo Beach, California where she inherited a two bedroom beach-front condo that is right upstairs from her business. Life is good, until she enters a secondhand store searching for an old, but new to her, ornate metal bed frame. As she is making her way around the store a painting captures her attention, and whisks her back in time, but just for a short confusing time. Now, the painting won’t let her leave the store without it. Of course she finds the bed just as she had pictured in her mind. But, it is the painting that is her ticket to a destiny in the past that she must fulfill.

Carynn’s female friends, Penelope, Drip, and Brooklynn are all great characters. Leif Calland is a handsome young lawyer who lives down the way a bit who Carynn has a standing friendship with. Then there is Carynn’s familiar, Tag, a talking parrot who is a hoot! He lives cage less, however, he has a perch and free range of the house and an open window.

Carynn keeps getting thrown back in time to the 1600s in Bergen, Norway during the height of the witch trails. She and her friends are scrambling to figure out why this is happening. With each trip back Carynn is able to gather a little more physical and emotional information. Brooklynn, a Librarian and a witch, is helping by gathering the written history of Bergen in the 1600s. The twists in the plot are a web of emotions and conflicts. It’s also getting harder and harder to keep the witchy stuff from Leif as he becomes a more permanent fixture in Carynn’s life. Then Leif’s grandfather shows up, and he seems to have some knowledge of that time period.

I enjoyed the way all the many ends were tied together in the end. I can see this being an interesting and fun series if the author goes that way with this book.

I came across a number of small proofing issues, wrong words, extra words, missing words, and spaces between words. I would like to see these issues resolved.

Sadly, there is also something odd about the distribution of upper and lower cases in the title on the cover. Personally, as a self-publisher, I would like to see that resolved too. We self-pubbies work really hard to produce professional work, and it undermines us all when something like that slips through the proofing net.

Oh my! I do see what you are saying, Judi Moore! I wonder what the author and the book designer were thinking? And now since you pointed that out to me, it is distracting.