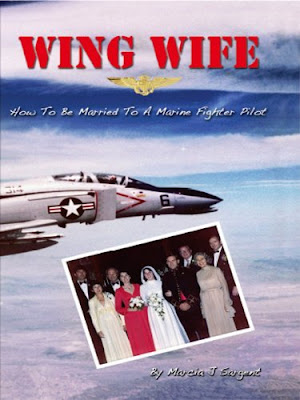 A memoir of the author’s time married to a Marine fighter pilot.

From 1975 until 1987, Marcia Sargent was married to a Marine fighter pilot, the basis for this book. When her husband retired, they returned to her native Southern California, where she was an elementary school teacher. Sargent lives with her husband, cat, and parrot and loves walking the sands of Laguna Beach. In addition to this memoir, Sargent has two books for young adults, Day Monsters and Night Monsters.

For more, visit the author’s blog.

I enjoy memoirs that give me insight into a life different from what I’ve experienced. Or for that matter, one like my own, so I can compare and contrast. One thing that struck me about Wing Wife is that it gives a glimpse into two different lives, not just the author’s experiences as a military wife, but also her husband’s triumphs and struggles as a Marine fighter pilot.

In the post-Viet Nam war era covered by this memoir, I was surprised to discover how dangerous being a fighter pilot was. As Sargent explained, “death was no stranger, even in peacetime.” As a newlywed, she had all the issues adapting to married life most people find. In addition, dealing with the “capriciousness” of the military (something she said the Marine Corps excelled at) and the expectations that came with being a “military wife” added to the normal newlywed stress. Sargent’s memoir runs the gambit from funny to heartbreaking. A good read.

As addenda to the memoir are several short essays called “aviator briefs.” These take specific items that were discussed in the body of the memoir where going into more detail would have caused the main narrative to drag, but for those interested in knowing more on the subject, these expand on what was included in the body of the book.

A small amount of adult language and some adult situations.