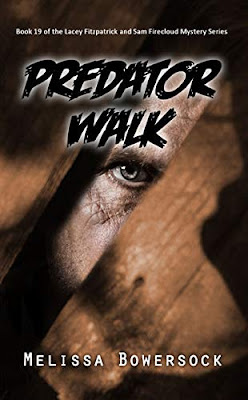 “When medium Sam Firecloud and his partner, paranormal investigator Lacey Fitzpatrick, are called in on a new case, it appears to be a normal haunting, if there is such a thing. But neither is prepared for the effect this ghost has on Lacey, nor the ripple effect through their own relationship. Suddenly it’s not just sending a lost spirit on its way that concerns them, but Lacey’s own mental and emotional health, and—perhaps—the future of their partnership.”

“Melissa Bowersock is an eclectic, award-winning author who writes in a variety of fiction and non-fiction genres: biography, contemporary, western, action, romance, fantasy, paranormal and spiritual. She has been both traditionally and independently published and is a regular contributor to the superblog IndiesUnlimited. She has a tattoo on the inside of her left wrist that says IMAGINE. In her next life, she plans to be an astronaut. She lives in a small community in northern Arizona with her husband and an Airedale terrier. She also writes under the pen name Amber Flame.”

Predator Walk confronts serious subjects of rape, depression, and family secrets. Catherine Epps places a call for help due to a heaviness she is feeling in the master bedroom of the family home she inherited after her mother’s passing a few months ago.

During Sam’s Walk, Lacey has a strange reaction. This case is not the simple haunting they were expecting. First, Lacey’s research keeps hitting dead ends, and stories/memories aren’t adding up. I enjoyed the path Ms. Bowersock has Lacey taking to suss out the contributing factors of the case. Things get personal for both Catherine and Lacey. The reality of Catherine’s childhood is completely undone. And Lacey is haunted by a past she thought she had buried deep enough.

On the home front Lacey and Kenzie decide to grow milkweed for Monarch butterflies to lay eggs on. Kenzie becomes enthralled and decides to write a school report on what she is learning and experiences watching the whole life-cycle of the fascinating Monarch butterfly. Since Daniel turned fifteen recently, Sam decides to give Daniel driving lessons. Oh, fun times!

Back to the case at hand. The plot take some surprising twists and turns. Sam and Lacey decide a second Walk may be in order. On this second Walk Sam learns more and other things come to light. Now, Catherine needs time to digest all she has learned about her mother’s past. She also decides to take another path to learn about her biological father, which brings surprising results. And Lacey admits she has some demons of her own to deal with.

While heavy topics are revealed Ms. Bowersock handles them with respect and honesty from the victims resulting emotions. I love the way characters connected in this story, I see bright things in the future for all.

I was a beta reader and can’t speak about the finished product. However, Ms. Bowersock’s are books are generally clear of proofing issues.

Thanks for dropping in and commenting, Ms. Bowersock. You are welcome!