Reprise Review for Mountains of Mischief by Gordon A. Long 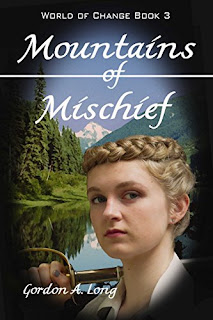 Trapped in the suffocating depths of a crumbling mountain fortress by an ambitious and relentless foe, Aleria struggles to survive as her small party gets whittled down and her confidence in her ability to do her duty fades.

Even the sturdy presence of her guard Captain, Erlon, with his hand-and-a-half sword, and the handsome but diffident Kolwyn anLlannon, inheritor of the lore of the Old Ones, can protect her party if she makes the wrong move.”

Mountains of Mischief is Book 3 in the World of Change series. Could possibly be read as a standalone but I would suggest reading Out of Mischief and Into Trouble first for a fuller understanding of Aleria, Kensel (her father), Maddoes, and Lord Raif. Original review ran January 19, 2016.