Reprise Review: I Came to Find a Girl by Jaq Hazell 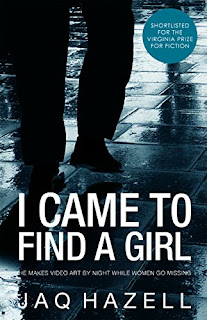 Shortlisted for the Jane Austen Short Story Award and The Virginia Prize for Fiction, British author Jaq Hazell writes crime fiction and contemporary short stories for adults, as well as children's fiction and YA. She has an MA in Creative Writing from Royal Holloway, University of London. Born near Portsmouth, on the south coast of England, her first full-time job was at Buckingham Palace. She has also worked as a humorous greetings cards designer and a journalist. She lives in London.

Pretty great post. I simply stumbled upon your weblog and wanted to mention that I’ve truly loved surfing around your weblog posts. satta king has turned into a real brand to win more cash in only a brief span. Subsequently, individuals are so inquisitive to think about the procedure of the game. Here we have brought a few procedures that will help you in understanding the best approach to gain cash by the sattaking. Also find the fastest satta king result & chart online at Online Sattaking