Review: Among the Ruins by Dominic Peloso 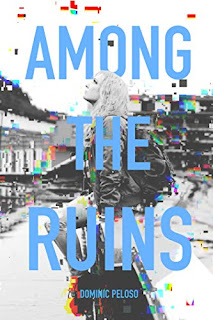 “An aspiring actress finds herself the only person still alive after a plague has devastated the world. With no purpose left, she finds herself almost unable to go on; until she meets literally the last man on earth.

Together the pair find a reason to live within each other, and work to build a life on a beautiful, quiet Earth they have all to themselves.

But when a message from someone long thought dead warns that all is not as it appears, paranoia sets in. Is the last man on earth her charming savior or a creepy captor?

Gripping, packed with twists and turns from the first page to the very last, this stunning psychological thriller is a rollercoaster of a read that explores gaslighting, Stockholm Syndrome, disassociation, mental illness, existentialism, and the search for purpose in an absurd universe.”

A former policy analyst for the US government with a focus on bioterrorism, Dominic Peloso now lives in what he calls the “rainy part” of Alaska. He’s written multiple books that tend toward the dystopian.

This was definitely a different kind of read. The premise that Elyse, the protagonist, was the last person on Earth, at least as far as should could tell until she ran into the last man on Earth, was one that hit close to home. A virus that kills off essentially everyone might even be a good reminder that our current virus issues could be a lot worse. The last part of the book’s blurb describing it as “a rollercoaster of a read that explores gaslighting, Stockholm Syndrome, disassociation, mental illness, existentialism, and the search for purpose in an absurd universe” is a description that couldn’t be much more accurate. Some of those issues are possibilities in what happens in the story and some are absolutely true. Which fall into which category, you’ll have to decide on your own. I’m still not sure. Stories that put me, as the reader, in a position I’ll probably (and hopefully) never come close to experiencing and encourages me to grapple with the hard questions that characters in the story have to deal with are among my favorites. This tale certainly had me wondering whether or not I’d take the same path that Elyse did.