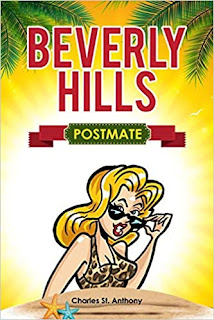 “After purchasing a new electric car to avoid catching the coronavirus on mass transit, Charles St. Anthony needed to come up with some money fast. Hoping to rake in some big tips, Charles decided to do Postmates in the areas the rich and famous play.

In this humorous short read, Charles explores Beverly Hills and the neighboring areas of Los Angeles using food delivery apps. He takes you down the rabbit hole of Beverly History, and introduces affordable things to eat in America's most glamorous zip code: 90210! Charles serves up "Beverly Hills on a Budget" by introducing economical (but delicious) food he discovered in Beverly Hills—foods that taste expensive but come at prices everyone can enjoy.

After completing more than 500 deliveries via Postmates, DoorDash, and Uber Eats you'll learn what people in LA—a city known for health and fitness—truly eat. The answer might be greasier than you're expecting! Also, Charles answers pressing questions such as what was the most popular type of Taco Bell sauce packet, what food truck has the most devoted fan base, and what was the total number of French fries ordered in his 500+ deliveries. It's a feel-good, laugh out loud short read that shows how food delivery apps offered a path to dignity to people who needed to eat and people who struggled to make money in the pandemic era.”

Charles St. Anthony is the author of several short humorous reads. He also has a humorous podcast called “T with Charles.”

I’d enjoyed reading Uber Diva, Charles St. Anthony’s humorous memoir about his time as a driver for Uber, Lyft, and other rideshare programs in San Francisco, so giving this new humorous memoir a try was an easy decision. The two books have some obvious similarities and a few differences. The author is operating a bit farther south in California this time with his focus being on Beverly Hills in the customers he was aiming to serve and the restaurants he aimed to do deliveries for although the area he worked sometimes slid into nearby areas of the Los Angeles metro. In this book he’s still driving all around based on what a customer has requested via an app (actually multiple apps), but the humor in the story doesn’t come from his passengers, at least not directly (those Big Macs, cupcakes, “famous garlic noodles”, and the lemon chicken plate from California Pita don’t even talk), but St. Anthony still finds lots of humor. The reader also learns some interesting history of Beverly Hills, including the answer to the obvious question, “who the heck is Beverly?” I suspect many of us have used Uber Eats and apps like it much more in the recent past. Here’s you chance to see what the person leaving the food on your doorstep thinks. Be sure to tip them well.