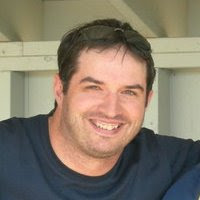 I write escapism fiction. I write for the people that hate reality. Their lives aren’t doing so well, so they jump into a book to escape their lives.

When did you know you wanted to be a writer?

I think I came out of the womb writing, to be honest. Actually, I knew I wanted to be a writer when I was 14 years old. That’s when I met the man—two men, actually—who became my mentors: Bill Gilman, who worked then for the Sentinel & Enterprise, and Mark Ambrose, who was my first semester Freshman English teacher at Fitchburg High School. Bill was a sportswriter then (he’s now the editor of the Tewskbury Patch, an AOL/Huffington Post company) and he covered Fitchburg High football games; he was the one who helped me slide my foot in the door. Mark gave excellent writing assignments that brought out a student’s creative side and made you really think while brainstorming, and he’d always give a new take, like an editor, on how a story should be written.

Who are your favorite authors and how do you think they’ve influenced your writing?

Professor Tolkien, right from the start. When I began this journey in 2003, I wanted to be a fantasy author, and I wanted to write like Tolkien. I wanted to be descriptive. I wanted to create a world that felt lived in. I think I accomplished that, and that story will continue within the next month or so with The Shadow Looms. R.A. Salvatore is a New York Times bestseller who lives a few towns away from me in Leominster, and he was the one who convinced me to write my first novel; I loved Bob’s fight scenes, and I knew I could write like that. Steven Savile is a British author living in Sweden, and I read everything he writes; he has such a way with the written word that I’ve never believed possible. He’s always at the ready with advice. He was the one who convinced me to write thrillers. Kevin J. Anderson is a prolific science-fiction writer who lives in Colorado Springs, a man who writes even while he sleeps. I absolutely want to be like him; he publishes books that resemble doorstops. People say I’m rather prolific, but I don’t even come close to matching KJA.

You’ve worked for several years as a sportswriter for multiple newspapers, I believe both as a staff writer and as a freelancer. How do you think your journalism experience has helped you as a fiction author?

Journalism has taught me how important it is to write under deadline. Every night, I have to submit my game story by such and such a time, which has forced me to write rather rapidly, on a time constraint. I hit my deadline constantly; there are certain times in the summer where a baseball game will begin rather late, and I end up phoning in a brief story for the paper, yet I write a full story for the web after deadline. I’m still writing on a time constraint, technically, because the editor is just as tired as I am and wants to go home. But seriously… writing fiction isn’t much different, and this is something I learned from Kevin J. Anderson. He meets his deadlines with his fiction, and I try to do the same thing, even though I self-publish. Any author making a living at this is writing under a time constraint. I work on a rather tight schedule: I look at a calendar and say that such and such a date is a deadline for my work. I can usually write a large novel in 2-3 months, then give myself some time to recuperate before I dive into the edits. From conception to final edit takes about 9-10 months nowadays. Not exactly a daily newspaper speed, but then again, Rome wasn’t built in a day. I can release four or five novels, whether adult or YA (YA is usually shorter in word count length), a year using this method.

Have you ever had a job that wasn’t writing related? If so, what?

I’ve worked at a Subway restaurant, my local radio station (although I did write news), as well as selling cell phones. Other than the radio station, not too glamorous.

Your first novels were all either fantasy or science-fiction and written under a pen name. Are you keeping the two personas separated or can you tell us about your alter-ego and what he or she has written?

When I began writing, I wanted to honor one of the authors that I had read in Mark Ambrose’s class. Robert Cormier lived in Leominster and was a prolific young adult author who wrote The Chocolate War, I am the Cheese, etc., and I found out a couple of years after that, while a cub reporter for the Sentinel & Enterprise (I started as a sophomore), he had written columns for our paper in the 1970s and 1980s as John Fitch IV. Interesting, I had thought at the time. I had decided to write under the name John Fitch V as an homage to Cormier. That name I have since retired.

My first six novels are under that pen name; I call those the “Classic” novels. Most of them are fantasy, like Tolkien’s Lord of the Rings (and if you think I said that for the SEO hits, you know me too well), while I wrote a Star Wars-ish space opera and a historical sports novel that involves a bit of time travel.

Is it true that you actually have five pen names and I haven’t discovered them all yet?

LOL, that is incorrect. The running joke, folks, is due to my author friends considering me to be rather prolific, and they think I’m writing other authors’ books. Supposedly I’m writing women’s fiction under the name Beth Orsoff and YA paranormal under the name Imogen Rose.

You’re definitely prolific. How many full-length novels did you release in 2011? So far in 2012?

I released six books in 2011: The first three Jaclyn Johnson novels, the first Obloeron prequel (The Rise of the Dark Falcon), Royal Switch, and Zombie Showdown. I’ve already released two novels in 2012, Eminent Souls and Cold Altar. Two more are on the way: the second Obloeron prequel (The Shadow Looms) and Federal Agent, the fourth Jaclyn Johnson novel. I may sneak in a YA book before the new year, too.

I don’t think it is a secret that I’m a fan of your Jaclyn Johnson, code name Snapshot series, which I believe are also your most popular books. Some people love them. Judging from some of the reviews on Amazon, other people don’t like them at all. What do you think it is about Jaclyn that attracts such extremes in opinion?

I think it’s the believability of the character, or it’s because the haters are just internet trolls/book snobs, but that’s neither here nor there. Look, I write escapism fiction. I write for the people that hate reality. Their lives aren’t doing so well, so they jump into a book to escape their lives. That’s where I come in. Jaclyn is a kick-ass, half-blind CIA Counterterrorism agent aided by technological enhancements, mainly in the form of a Heads Up Device that resembles a pair of Foster Grant sunglasses that she has to wear constantly. Jaclyn is a cross between James Bond, Mitch Rapp and Lora Craft. She is a shoot first, ask questions later kind of chick who was trained during her teenage years, just after 9-11. She was trained to be heartless, but as we’ve seen (SPOILER ALERT), she has a soft side for a certain man. She also has a James Bond-esque car that usually causes a bit of destruction. I’ve received comments from people who love Jaclyn, and some people who don’t like the books, either because of the believability or because the books are overly descriptive. You’re not going to win over everyone; there are people who put down Tolkien.

Many of your books take place on your home turf, whether in North-Central Massachusetts where you grew up or Boston, the nearest big city. But some of your Jaclyn Johnson books are in places far from home. I paid careful attention to how well you caught the feel of Las Vegas and whether you got the geography right, and you got it right. Have you visited these towns or, if not, how do you get these kind of things right?

Boston is like my second home, and it was easy to take a train ride right into the old city and walk around for a few hours, snapping photos to get the descriptions right at a later time, and I also wrote notes to myself as I walked; one note that I had jotted down when I had approached the Marriott Long Wharf from the north is that the hotel looked like an old-style passenger ship complete with its eastern end resembling that ship’s prow. For some of the other books, like Rogue Agent and Double Agent, it was a lot of map study. I love geography, and I love topography, two subjects I excelled at in school. A story can be envisioned by studying a map. Google Maps and Bing Maps are huge in this. Google Earth is even better, especially in a big town such as Las Vegas, where you can get down to street level and see where the Google car drove, getting a 360-degree picture. It makes it so easy to write on a limited budget.

What other books are on the horizon for you?

Well, I’m deep into the first draft of the fourth Jaclyn Johnson novel, Federal Agent. The second Obloeron prequel is coming out before the end of the summer, I believe. I have YA books in my mind, a fifth (and a sixth, seventh and eighth) Jaclyn Johnson novel, another mystery, as well as some sci-fi down the road. I have enough material to write about. I’ll be here for quite a long time.

What was the last book you read by a fellow indie and what were its strengths and weaknesses?

I read the first few pages of one book last week, and I just couldn’t get into it. It had a massive point of view shift that threw me out of the story. There are some books that have this problem, and I think too much like an editor sometimes. Other authors are just fantastic at dialogue and the quick hit sentences.

Thanks for the opportunity, Al. I really appreciate it, and stop playing snake with me. J

Find Sean's books at Amazon US, Amazon UK, Barnes and Noble, or Smashwords.

For those by John Fitch V, visit Amazon US, Amazon UK, or Barnes and Noble.

Thanks so much, Al!

Loved the interview, Al. Sean, you are an inspiration in how disciplined you are with your writing schedule. I need to follow your example.