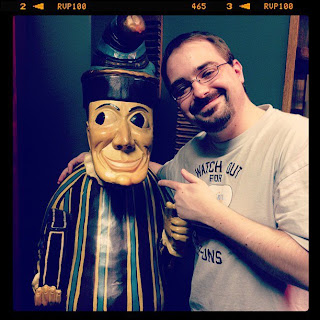 I think that’s where I really started to learn my strong points when it comes to writing. I wasn’t trying to come up with complicated plots. I was trying to write about real people.

When did you know you wanted to be a writer?

I loved movies when I was little and I always thought I’d be a film maker. I loved seeing characters interact with each other and I loved watching storylines unfold. When I read my first chapter book in grade school (embarrassed to say this, but it was the novelization of the movie Arachnophobia—but we all had to start somewhere!), it was like I was watching a movie inside of my head. And I think that’s when I decided that I wanted to be a writer. Even before then, I was always fascinated by picture books and creating my own. I was a terrible at drawing, but I still enjoyed it dammit!

So far all of your available works are various kinds of short fiction or collections of the same. Which of the available book available do you think is your best and why?

Hands down, In Decline is my favorite and I think it represents my best writing as of now. It may not be my most popular book if you’re looking at it sales wise, but I really enjoyed writing those stories. A bunch of them were written during my time at Columbia College Chicago, and I think that’s where I really started to learn my strong points when it comes to writing. I wasn’t trying to come up with complicated plots. I was trying to write about real people. I might’ve made up the stories, but I was trying to come from it at an angle where somebody could read them and think that they actually happened. That the characters felt real enough to the reader(s).

In Decline is my favorite and I think your best too. Tell us about this collection and its inspiration.

I really appreciate that. I’ve heard a couple others tell me it’s their favorite as well, and I’m always thrilled when I hear it. I’m a huge fan of short stories. I have a terrible attention span and I’m always starting books and never finishing them. Nine out of ten times, it’s not even the author’s fault. I think that’s why I love short stories. I like seeing what happens in a limited amount of time. It’s fascinating to see how different writers begin and end their stories, because there is almost never a concrete ending. You’re always left wanting more, yet you still feel like the story’s complete.

I had a bunch of short stories that I was trying to get published. I’ve submitted to a bunch of different literary magazines, and every one of them got rejected. When I decided to put out a collection on my own, I picked out what I felt were the strongest stories. Also, they had to go together. I had a few stories that I really did want to include, but didn’t because they didn’t feel right in the collection.

I love writing about downtrodden characters, especially at that time because I was in a really dark place. I felt hopeless when it came to dating and relationships. It wasn’t working out for me, and I started to become depressed. I was convinced I was never going to find anybody. I think some of that bled through when I wrote a bunch of the stories. Sometimes you write what fits your mood. It’s a lot easier to write about somebody down on their luck when you feel that you’re going through somewhat of a tough time yourself.

And maybe that’s why I haven’t been able to come out with another collection like In Decline. I’m in a much different and happier place now. Not that the desire to write about depressed or unhappy characters is gone. I still think a story about somebody who’s struggling is far more exciting and entertaining than a story where everything is wonderful.

Your most recent release is Lessons IV: The Dead Carnival and Other Morbid Drabbles, the fourth collection in this series of “drabbles.” Explain what a drabble is and how you’ve ended up releasing four drabble collections.

M.P. McDonald is the one who told me about drabbles. I think we were talking about flash fiction one day and she asked me if I had ever attempted a drabble. Of course, my first reaction was, “What the hell is a drabble?” She explained that it’s a story that’s 100 words long. I read David McAfee’s The Lake and 17 Other Stories maybe a month or two before this was brought up, and that was a collection that was made up of a bunch of 100-word stories. It’s a brilliant, twisted little collection.

Then October hit and I felt like trying a new project. I thought I’d try the 100-word stories for fun and maybe publish them on Smashwords for free if I came up with a few. Since Halloween was coming up, I thought I’d try my hand at horror. I loved horror as a child. In grade school, I wrote tons of horror stories. They were really shitty stories. Mostly cheap Stephen King knock-offs, but I was doing it for fun at the time so it didn’t matter. I thought that writing horror would take me outside my comfort zone, and that’s one of the most valuable things I learned while I was at Columbia: If you only write what you’re comfortable with, then you’re never going to evolve as a writer.

I wrote the first drabble, Lessons, and to my surprise it turned out pretty good. I wrote a few more after that, and then I was on a roll. So, I decided what the hell? If I can come up with a decent number of drabbles, then maybe I can sell it as a collection. It was an experiment, and it was exciting to try out something new. It was untouched territory for me, so I was able to kind of go crazy with it.

I ended up doing a couple of collections because people seem to dig the drabbles. Amanda Hocking mentioned the first book on her blog and I think that’s when it really took off. I know I gained a bunch of fans because of her, and I can never thank her enough for that.

I never thought I’d turn it into a series. Just goes to show how much fun they are for me.

Does the 100 words count the title? Have you ever cheated and snuck in one that was 101 words?

I usually don’t count the title, unless it’s a ridiculously long title. For the most part, my titles are pretty short and to the point. So for me, either the story itself must be 100-words long, or if I’m going to include the title then the entire thing has to reach the 100 word limit.

When are you finally going to write that novel?

I have no idea. I’m doing my best to try my hand at longer works, but my love will always be short stories. My biggest fear of writing something longer is that it’s going to feel dragged out. At least with a short story… it’s short. Less of a chance of the story outstaying its welcome.

Your college major was in fiction writing. How has that education helped you as a writer? Are there any ways you think it has hurt?

When I found out you could major in such a thing, I was all in. After going to school for so long and being forced to take subjects that bored me to tears, it was nice to finally take classes on something that I loved and was passionate about. Columbia College Chicago played a big role when it came to me finding my writing voice. After I got out of high school, I was just writing things to be shocking. When I got to Columbia, I realized my stories all sounded the same and they were only dark for the sake of being dark, with very little substance. It took me at least one semester to get that out of my system, and that’s when I think I really started to grow as a writer. So I have absolutely no regrets about majoring in Fiction Writing. My family worried at first, but when they went to orientation with me at Columbia, they fell in love with the school and the program.

Who are your favorite authors?

Too many to name. My top favorites have to be Kurt Vonnegut, Richard Yates, Raymond Carver, Chuck Palahniuk, and Stephen King.

Are there authors that you think you’ve drawn from for inspiration in developing your own style?

Chuck Palahniuk’s Fight Club is what made me want to write stories in First Person. I loved the flow, the language, the dread… he just pulled it off amazingly. A lot of my earlier stories before I went to college definitely had a little of him thrown into them.

Raymond Carver is the biggest influence to me when it comes to short stories. Like I’ve mentioned before, one of my biggest problems when I first started out was I was trying to write stories with really outrageous and overcomplicated plots. Carver showed me that you didn’t need any of that. He showed that you could write stories about everyday things and everyday people and make them interesting. Without Carver, there would be no In Decline.

What is the last book you read by a fellow indie author and what did you think of it?

I’ve been all over the place with books lately, but the last one I finished was Freeze by Daniel Pyle. I absolutely loved it. Couldn’t put it down. It was scary and creepy, but he also gave you characters that you really cared about.

Tell us something about yourself that would surprise most people.

Even though I write about really depressing and disturbing things, I’m really a big goofball.

A Land of Ash (Contributor)

Lessons IV: The Dead Carnival and Other Morbid Drabbles
Posted by BooksAndPals at 8:00 AM

It is good to see someone who majored in fiction writing achieving the success that Michael has. Maybe there is hope for the rest of us! :)

Awesome interview Al and Michael. I had never heard of a drabble until I read your twisted little drabble books. I found them quite entertaining, which surprised me because I don’t do horror well. I think it takes real talent to be able to do the vignettes of a story with exactly one hundred words.

I also enjoyed A Gnome Problem, now sit down and write some more short stories. Maybe one where Mr. Giggles sees the light and turns into a superhero sock monkey! One who protects innocent children from evil dolls! You can even give him a cape!