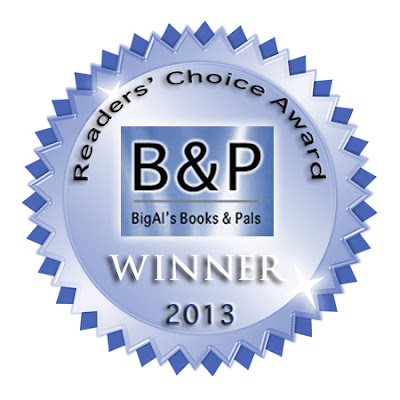 In the twelve months ending February 28th, 2013, BigAl and the Pals received over 1,400 books to consider for review. Almost 300 of them were selected, read, and reviewed. From those we chose the books we felt stood out from the pack as exceptional examples of Indie writing (self-published and small press) and divided them into twelve categories.

For two weeks readers were asked to vote for their favorite nominees. Just shy of 1,000 readers cast votes. The winners and nominees will be featured on a special Readers' Choice page for the next year. (Look for the page to appear in the index on the top right of the page in the next few days.)

In conjunction with this we also had a giveaway with three prizes. First prize was a $50 Amazon gift card. Second prize was to have any six nominated books gifted in a Kindle format. Third prize was three books gifted in a Kindle format, each written by one of BigAl's Pals, Allah's Revenge by Pete Barber, The Fix by Keith Nixon, and Strangers are Friends You Just Haven't Killed Yet by Ryan Bracha. Winners have been notified and you'll be able to see the list of winners on the voting page within a day or two.

Congratulations to the winners as well as the nominees.

And now (finally) the winners.

Thought I Knew You
Kate Moretti

Before Her Eyes
Rebecca Forster

Posted by BooksAndPals at 10:10 PM

Congrats to the winners! :)

Congratulations to all, and to all the great books nominated! Thank you, B&P, for your work in putting the contest together and your support of indie authors.

Well, Laurie said it all, but yes. A lot of work must have gone into this.

Oh, just in the interest of accuracy (not bitchin'), my book's title is misspelled!

Thanks, Big Al's Books and Pals!

There had to be at least one typo, David. (Now fixed. Thanks for pointing it out.)

Awesome list -- congrats, winners! And thanks to Big Al and pals for doing this. It's wonderful to see great books get recognition!

Heh, no problem, and thank you for the tremendous effort this must have taken. :)

Congratulations to all the winners, especially Laurie Boris, whose novel I loved and who gave me pause for a second and presented the difficult choice of whether to vote for hers or mine in contemporary fiction!

Thanks, Al, for this wonderful contest. I always say it, but you are the best!

Thanks, Karen. I counted last night and found that I'd read slightly more than half the nominated books and found it almost impossible to pick a favorite in any category. All the nominees are winners in my eyes.

I am honored. And congrats to all the winners and all the nominees

Thanks for stopping by everyone. I've said it several times, but can't repeat it enough, all of the nominees are good. I'm glad I didn't have to pick favorite in each category because I'm not sure I could.

I'm coming to say my thanks rather late but no less sincerely. Thanks to all who took the time and trouble to vote (and not just for me) and for Big Al and the Pals for putting the whole thing together. A pleasure and an honour to be part of it.

Congrats to the winners! I'm honored just to be nominated with you all. Thanks, Big Al, for everything you do for Indie authors. You truly are a pal!

Congrats to all the winners!

Those are some great books there! Congratulations to the winning authors. And thanks, Big Al, for all the work behind this.

CONGRATS to the winners!!!