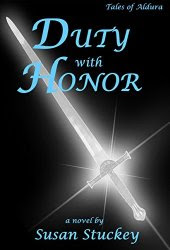 Susan Stuckey is “Currently (mostly) retired, but 'back in the day' Susan was a meek, mild-mannered, self-effacing accountant/auditor by day but after 5:00 her imagination broke free. She either played with historical stories, or in the magical World of Aldura she created.

“Operating under cover while searching for the Chorkan Red, Jatham Draben is embroiled in fighting two wars and forced to dodge multiple assassination attempts. Can Jatham accomplish his mission and end the Chorkan Red’s efforts to subvert one royal family and topple another before an assassin gets him?”

Amazon lists Ms. Stuckey’s works under Sword and Sorcery, as well as Fantasy, and Historical. The genre is spot on for this story with Jatham involved in brutal area wars for the first 20% or so of the book. Jatham is miserable with everyone thinking he has been kicked out of the Stormhawks while he hunts down Chorkan Red. It becomes clear that he is a target for assassination on and off the battlefield. Luckily for him he seems to have been adopted by General Mulman’s war dog, who is full grown but still a pup, named Monster. Monster becomes Jatham’s constant companion, always aware of danger when it is near.

After an attempt on Jatham’s life, where he lost a dear friend, Commander Kendrick released Jatham from his vow to not use his magic. Having been claimed a war hero by General Mulmam, Jatham is elevated in status to the rank of Count of Hawks by King Myldon. He also bestowed the estate of Hawks Nest bordering Derind Mountains that controls the eastern pass into Ryland. This happens to be one of the passes that the Chorkan want to control. This also increases the size of the target on Jatham’s head.

This is where the story really took off for me. After getting settled in his estate, assigning jobs, and meeting the townspeople he is to govern and protect, things start happening. There are traitors in his midst and assassins in the mountains. There are secrets being kept, subterfuge is in play, and magic engaged from several directions. The story is packed with action, heartache, and intrigue as the plot twists and new characters are introduced. Readers are going to love Tim, the clever little street rat. I was surprised when Jatham turned cunning when it comes to justice being served. He’s been pushed to his limits and it’s no holds barred from now on. Ms. Stuckey did an excellent job weaving all the story arcs together and bringing the story to a satisfying end. I do hope to see more of Jatham and Hawks Nest in future books.

Duty with Honor is the 4th book in The Duty Series. This series builds and is best read in order starting with Duty’s Call first, Duty and Justice next, and Duty’s Price third.

I did come across a small number of editing issues, such as missing or extra words.

Thanks for taking the time to read and review my novel. I appreciate all of the time and effort spent in supporting the indie universe.
Susan

Thanks for dropping in and commenting, Ms. Stuckey.