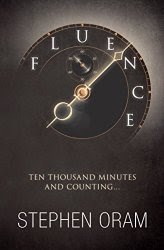 “Stephen Oram lives in Fitzrovia, London. As a teenager he was heavily influenced by the ethos of punk. In his early twenties he embraced the squatter scene and then joined a religious cult, briefly. He did some computer stuff in what became London's silicon roundabout and is now a civil servant with a gentle attraction to anarchism. His fascination with exploring our darker places through near-future fiction prompted him to imagine alternative worlds and then write about them.”

"Amber is young and ambitious. Martin is burnt out by years of struggling. She cheats to get what she wants while he barely clings on to what he has.
It’s the week before the annual Pay Day when strata positions are decided by the controlling corporations. The social media feed is frenetic with people trying to boost their influence rating while those above the strata and those who’ve opted out pursue their own manipulative goals.

Set in a dystopian London, Fluence is a story of aspiration and desperation and of power seen and unseen. It’s a story of control and consequence. It’s the story of the extremes to which Amber and Martin are prepared to go in these last ten thousand minutes before Pay Day."

If you decide to try this novel, I suggest you buckle your mental seatbelt. The world in which Amber and Martin exist is about as zany a place as any I’ve come across whilst reading through Al’s list. Amber dresses and acts like a high-society member of The Hunger Games' Capital City. Martin is haunted and stressed and as out of place in his strata-level as George Orwell’s Winston Smith in 1984.

The strataed-society with its color-coded citizens (nice touch) manipulated by a small group of corporate conglomerates is not an uncommon theme in this genre. Nor is the concept of an underclass of “outliers” who reject the controlled society in favor of freedom. If I have a complaint of the novel it would be that the central theme is unclear. At times the scenes are so directionless that it’s hard to see what purpose they play in advancing the story. But by the same token, those scenes are so crazy and off-the-wall and imaginative and just plain weird that I found myself enjoying them in-the-moment and to heck with the plot.

English spelling, but nothing that would cause an American reader pause.