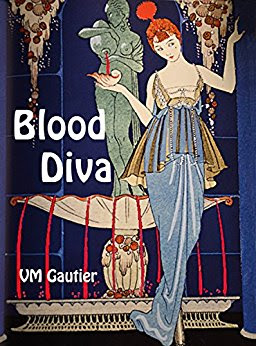 “The 19th century’s most infamous party-girl is undead and on the loose in the Big Apple.

When 23 year-old Parisian courtesan, Marie Duplessis succumbed to consumption in 1847, Charles Dickens showed up for the funeral and reported the city mourned as though Joan of Arc had fallen. Marie was not only a celebrity in in her own right, but her list of lovers included Franz Liszt – the first international music superstar, and Alexandre Dumas fils, son of the creator of The Three Musketeers. Dumas fils wrote the novel The Lady of the Camellias based on their time together. The book became a play, and the play became the opera La Traviata. Later came the film versions, and the legend never died.

But what if when offered the chance for eternal life and youth, Marie grabbed it, even when the price was the regular death of mortals at her lovely hand?

In 2014, Marie wonders if perhaps nearly two centuries of murder, mayhem, and debauchery is enough, especially when she falls hard for a rising star she believes may be the reincarnation of the only man she ever truly loved. But is it too late for her to change? Can a soul be redeemed like a diamond necklace in hock? And even if it can, have men evolved since the 1800′s? Or does a girl’s past still mark her?”

VM Gauthier is a pen name of an author who has written other books in different genres. While she (or is it he?) is keeping quiet about his (or is it her?) identity, I’ve been led to believe that I have read one of her (his?) other books. But I’m not sure. Maybe someday we’ll find out who this is. In the meantime you can visit his/her website where you’ll find out more about this book and the real person who was the basis for the fictional protagonist, but not much more about the author.

Fictional vampires have run the gambit from the garlic-dodging bloodsuckers who don’t come out in sunlight to handsome and sparkly creatures, hanging out on the Olympic Peninsula. Blood Diva gives us yet another twist on vampire mythology.

The story starts with the protagonist, a real-life historical figure, Marie Duplessis, on her deathbed in Paris. While some may be familiar with Duplessis and her history (which might give the story even more appeal), other than the little I picked up before reading this book I wasn’t, and didn’t feel as though it mattered. Mostly set in the modern day, predominately New York City, the little touches and details the author integrates in the story are likely to resonate with fans of the art world and opera, yet I’m neither and still found much to enjoy.

Beyond being an excellent story with some hot sex scenes, for those who like that, a clever and entertaining take on the vampire myth, and a love story, for those who look beyond the surface there is more. What does it mean to be human? Are some of the Earth’s creatures more important than others? (Put another way, if it is okay for us humans to kill “lower” animals for nourishment, would the same logic justify “higher” creatures killing us for the same reason?) If you could live forever, would that be a good thing and what would you be willing to give up to do so? Marie grappled with all of these questions. After you read Blood Diva, maybe your answers will be the same. Or maybe not.