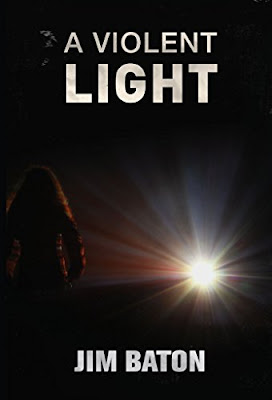 “The Youth For Peace Fresh Start Initiative gathers ten Muslim and ten Christian youth from ten nations around the world to learn new paths to peace. But the camp staff have some highly unorthodox teaching techniques. And when one by one the youth start disappearing, some of them wonder if the staff might not have an entirely different agenda. Those left behind must work together to solve the mystery before they also disappear. Meanwhile, unbeknownst to them, the entire world is watching…

Jim’s third novel of the Peace Trilogy confronts American prejudice head-on. Pursuing world peace today will require a generation committed to a deeper level of trust and cooperation than ever before.”

“Jim Baton has spent the last 20 years in the world’s largest Muslim nation, building bridges between Muslims and Christians who both desire peace. His speaking and writing call people out of fear and into authentic friendships that can change the world.”

A Violent Light started out slow for me. The underlying political point was obvious and something I agreed with. (I also assumed no one who disagreed with that stance would be likely to even start reading the story and would abandon it quickly if they did.) That the staff and the youth camp were not what the kids expected (no matter how much they tried to rationalize a way for that to not be) and the reason why seemed obvious.

However, as the story progressed I found it drew me in more and more. I found myself struggling to decide who was thinking most clearly when proposing ways to react to the situations they found themselves in. Their struggles caused me to think more deeply about some of the more serious questions facing the world today. By the time the story hit the climax the intensity had hit a level I’d have never anticipated in the beginning. That slow start was more than made up for coming down the stretch.

Although a case could be made for this book being aimed at the young adult audience since the primary characters fit in that demographic, some portions might be too graphic or intense for some of the younger part of that demographic. (It might be too intense for some adults, too.)
Although this is the third and final book in a trilogy, it can be read as a standalone.