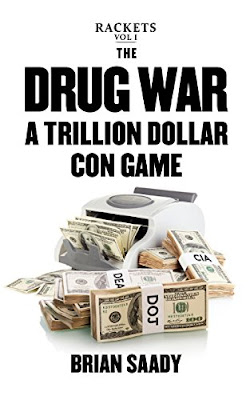 “The war on drugs is a microcosm of far greater systemic problems with criminal justice and politics. This book shines a spotlight on the bureaucratic and corporate special interests that are fighting to keep this disastrous policy in place.”

“Brian Saady is a politically-independent author who has a heavy focus on political corruption, crony capitalism, human rights, and civil liberties.”

For more about Brian, visit his blog.

When evaluating a non-fiction book, especially one that is indie published where I can’t assume the publisher has done any vetting of the author, one of the things I’ll want to consider is whether the author has any particular expertise in the subject. (At least if it is a subject that expertise seems to be required.) While the author’s expertise here appears to be largely from having written a lot for various venues about the subjects covered in his books, this book also has an advantage many non-fiction books aimed at a layperson don’t. It is extensively footnoted. If a statement doesn’t ring true and you want to dig deeper, the information to do so is right there.

When I started reading Drug Wars and the author’s contention early in the book that he was going to make a case that all drugs should be legal (maybe decriminalized is the better term), not just marijuana, but cocaine, heroin, methamphetamines, and all the other drugs that are currently illegal in the US, I had some concerns. I still do. But I’m leaning much more to his way of thinking now. I suppose that says something positive about the book.

My biggest complaints and concerns are twofold.

First, there were a few situations where I thought the author used facts in a misleading way. For example, he contended that the DEA has prioritized marijuana over more dangerous drugs. As proof, he compares the amount of marijuana seized by the DEA in 2011 by weight to other more dangerous drugs. He admits marijuana is the most commonly used and “the lowest hanging fruit.” That would tend to account for some discrepancy. A gram of the other drugs would tend to get more people high more times than a gram of marijuana as well. While his contention is probably true, the facts he used to support it don’t. Another example is when he compared the number of full-time employees a pro-Marijuana organization had to the number of lobbyists who worked at least some of the time for organizations involved in the pharmaceutical or alcohol industries. It was another apples and oranges comparison.

My second issue is that by the end of the book it felt like the author had tied every kind of political corruption or questionable government act to the drug war. On the one hand, he made the case for at least some tie. But, at a minimum, it felt like overkill and like the author was a bit too obsessed with making his case.

However, after discounting for those concerns mentioned above, The Drug War makes a good case for the author’s suggestion that the approach the US is taking in dealing with drugs is the wrong one and makes a convincing argument for who is responsible for our ill-conceived actions of the past. Even after discounting the argument for the reasons mentioned above I’m much closer to agreeing with the author than I was before.

Sounds a bit politicized. Too many arguments these days are overdone. They have a good point, but instead of making that point, they talk about Ivanka's shoes or some kid's t-shirt. If there's enough evidence--let it stand on its own whether it's Trump is an idiot or drugs are bad or drugs should be legalized. I don't get how legalizing drugs will stop government corruption. Yeah, government corruption around the drug trade certainly exists. But where there is money, corruption will follow.

Yeah, there is definitely some politics in his discussion, but I'd venture a guess that regardless of a person's politics they're going to find some of what he says that agrees with their politics and some that doesn't.