Reprise Review: A Christmas Carol 2: The Return of Scrooge by Robert J. Elisberg 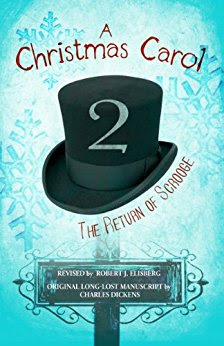 “A continuation of the beloved Christmas tale that quickly goes flying off in its own comic direction. It begins five years after dear old Ebenezer Scrooge has passed away and left his thriving firm to his former clerk, Bob Cratchit. However, Bob's overly-generous benevolence with lending and charity-giving has driven the company into the ground, on the verge of bankruptcy. And so the ghost of Scrooge returns one Christmas Eve to teach Cratchit the true meaning of money. Making the swirling journey through Christmases past, present, and yet-to-be all the more of a chaotic ride for Cratchit are the dozens of characters from other Dickens novels woven throughout the story, together for the first time. God bless them, most everyone.”

Robert J. Ellsworth is a native of Chicago who has written for a number of magazines, written screenplays (some for movies you might have seen,) non-fiction books, and is a two-time recipient of the Lucille Ball Award for comedy screenwriting.

It may seem strange to compare a Christmas book to the book The Princess Bride (you’ve seen the movie even if you haven’t read the book, right?), but I’m going to, because A Christmas Carol 2 reminded me of this classic in multiple ways (I know the literati might not call it a classic, but I do).

The first similarity is the premise that the book was written by someone other than the author. The Princess Bride was claimed to have been written by S. Morgenstern with a story involving the author, William Goldman, having it read to him as a sick child, only to discover as an adult that there were boring parts, so he’d republished it in what, if memory serves me correctly, was originally referred to as “the good parts edition.” This book (or so the claim goes) was written by Charles Dickens with Robert J. Ellsberg providing some commentary via footnotes.

Another similarity is the humor, sometimes subtle, in both. For example, A Christmas Carol 2 inserts short (sometimes just two or three words) from other sources (often Christmas songs and other seasonal fare) in ways that work in the context of the story, while evoking the source. I’m not sure whether everyone would see these as humorous, but it tickled my funny bone. A few examples are saying “the weather outside was frightful” or describing someone as “a jolly, happy soul with a corncob pipe and a button nose.” A second, ongoing joke was the appearance of several characters from other Dickens’ books with footnotes explaining the reason for including this character, often including actual (made up) quotes of correspondence between Dickens and his editor.

At one point as reading I started wondering if the author was making a political statement with the subtext (it seemed to be headed that way), but in the end, I decided I was probably seeing things (sometimes a cigar is just a cigar). If there was a message, it was one of moderation. I found this “sequel” to the beloved Christmas classic a fun read on many different levels.