Review: The Redemption of Michael Hollister by Shawn Inmon 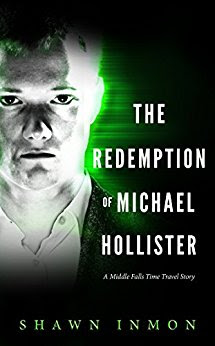 “All Michael Hollister wanted was death.

What he got, was time travel.

Convicted of murder, and with nothing left to live for, Michael commits suicide in his jail cell in 1977, then opens his eyes in 1966, in his eight-year-old body, all memories of his previous life intact.

His first thoughts are of the dark intentions of his father. When the man who raised him once again tries to do the unthinkable, Michael has a chance to right his childhood's greatest wrong. But, can he do that without becoming a killer all over again?”

“Have you ever noticed how almost every author on Amazon is both a ‘bestselling’ and ‘award winning’ author? Well, so is Shawn Inmon. He once dominated the Lithuanian Clog Dancing Romance category for two heady days back in 2013. He also was named third runner up in Mrs. Marsh's third grade spelling bee in 1968. Somewhere, he still has the certificate to prove it. Although he has never matched either of these two career highlights, he keeps plugging away.

Shawn hails from Mossyrock, Washington--the setting for his first two books, Feels Like the First Time, and Both Sides Now.

He is a full-time author who lives in picturesque Seaview, Washington on the Pacific Ocean.”

This book is being billed as the second in the “Middle Falls Time Travel series.” The first, The Unusual Second Life of Thomas Weaver, had as its protagonist a character who died and found himself in a new life, kind of. He’d wake up as the same person, taken back in time to when he was a kid, but with all the knowledge of what he’d done in his past life or lives. Maybe a better term would be a “do over.” In that book Thomas had a classmate, Michael Hollister. If you’ve read the book you’ll know Michael wasn’t a very nice person. In fact, he was Oregon’s most prolific serial killer.

With that introduction to Michael you might wonder how he could possibly redeem himself. But when Michael finds a way to “end it all” while in prison, then wakes up in his boyhood bed in his boyhood home he’s smart enough to recognize the chance he’s been given. That’s the easy part. The hard part is figuring out what to do differently this time around.

The author does a masterful job of taking a character that was irredeemable to those who read the prior book and somehow redeeming him. Not excusing him for the crimes he committed in his past life, but helping us to understand how he got to that point and drawing us into the story so that we were pulling for Michael to find a different path for his life the next time around. The premise of the books in this series of being given another chance is an interesting mind exercise that makes for entertaining books. Well done, Mr. Inmon.

This looks very interesting. I just downloaded a copy.