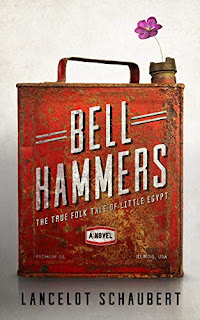 This clever book purports to be the life story of Wilson Remus Broganer of southern Illinois. It isn’t. It is the mashed together stories of a lot of lives from the oilfields, gathered by Schaubert, from Remmy’s first recorded memory at age six around the time of Pearl Harbour, until his death in 2015. Whether the stories were collected by Schaubert or he made them up, kudos for either a lot of research and sessions with a tape recorder, or a fine imagination.

Schaubert “believes that art should not merely entertain or sell product. [It] should cause us to change our minds, soften our hearts, and motivate our activism to be true and good.” That is a mighty manifesto. He practices what he preaches. He gives away cool stuff on his website, which is here. I beli.eve you can even get a free copy of this book there. Schaubert is a multi-talented artist: writing is only one of his artistic endeavours, and he writes SF as well as this current book.

He is obviously a flexible being, and would like us all to be that way too. For some people that is easier than it is for others. We are, after all, the products of the society we grow up in. One of Schaubert’s literary gifts is helping his audience to see with fresh eyes. That is rare, and when it occurs it is a blessing.

This is an outstanding book, and I recommend it to you heartily.

Despite being your British reviewer, I’ve read most of William Faulkner’s novels. One of Schaubert’s back cover puffs likens this book to Faulkner. This is not hyperbole: it is so.

There is never a dull page in this book. Wilson Remus (known as Remmy) is constantly playing pranks. Indeed, the hard knock life of the inhabitants of the area is softened by their constant pranks and jokes – but he is the pranking king. He is driven, boy and man; always working and saving for a paradise which he never quite reaches.

Along the road of his life we meet his family, from his grandfather to his own grandchildren. There is the planning and execution of The Impune Prank – the greatest prank of all which has consequences he didn’t foresee or intend; there is (consequently) jail time. In the background there is a family memory of riot and murder. These are just the highlights of the highlights: Remmy packs a lot in – it is a life both ordinary and absolutely extraordinary.

Occasionally one of the anecdotes disappears up its own fundament. It is still fun, still brings insights into the lives with which it deals, but it fizzles out somewhere in the long grass. Fret not. There will be another one along momentarily: fresh fizzing.

Schaubert gives a voice to the largely unheard people living a hard-scrabble life in southern Illinois when big oil (specifically, Texarco) was completely unfettered, bought who it wanted, drilled where it wanted, and paid no compensation for fouled wells, poisoned farm land, or sink holes. As the novel nears its end, the social toll and oily reach of Texarco assumes a larger place in the narrative as the focus pulls back a little.

For the full Schaubert Experience I urge you to read both the acknowledgements at the front of the book (which are truly fascinating) and the back matter (which tells you how the book came to be and, partly, what makes it so riveting). This is a book told throughout in working class southern Illinois dialect. In an appendix at the end Schaubert explains how Amer-english from that part of the world works. I found it fascinating. If it’s not your bag just skip over it.