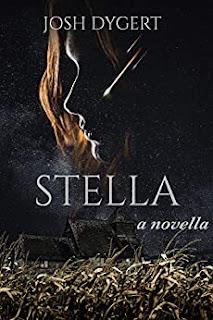 “Stella knew the names of the stars before she knew her alphabet. Although Stella’s mother disappeared when she was too small to remember, she grows up happy beneath bright Indiana stars in the small town of Torrance with her father, her dog, and her best friend. When a meteor lands in her father’s cornfields, Stella and her father run after the fallen star. Stella watches as her father touches the star. The moment he does, he disappears in a flash of golden starlight. Stella never sees her father again. From that moment on, Stella is terrified of the stars she always loved. She leaves Torrance, her dog, and her best friend only to discover that the truth she needs is still in Torrance. As a total eclipse approaches, Stella must find the courage to face her stars.”

“Josh Dygert’s short stories have appeared in a number of online magazines and anthologies, including in the #1 Amazon Bestselling Horror Anthology Secret Stairs. He is also the author of a middle-grade fantasy novel called The Story Traveler, which is available from Amazon. He studied English and Theater in college and now teaches middle school English.”

To learn more about Mr. Dygert check out his website.

Mysterious disappearances are nothing new around the farming community of Torrance, Indiana. Sixteen years ago Stella’s mom vanished when she chased a comet that landed in their cornfield. Despite growing up without a mother, Stella grew up happy and was always home at dark to spend time with her dad stargazing. During the latest meteor shower Stella’s father was so taken in by the size of this shower that when he saw one headed for the cornfield, he took off running to meet the meteor where it hit the ground. When Stella caught up with him she saw golden light weaving a chrysalis around him, then he vanished along with the light.

Bobby O’Malley, Stella’s best friend and closest neighbor, found Stella standing in the spot where her father vanished. He took Stella to his parent’s farm where she stayed during the rest of her high school years. Stella also changed her first name because she was angry with the stars. Stella had plans to never return to Torrance after finishing her college degree in astronomy. However, the universe led her right back to her parent’s farmhouse in Torrance to take care of some loose legal strings on the eve of a solar eclipse.

I honestly expected this story to be a cozy romance. Stella and Bobby were so comfortable hanging out together, but the slow burning flame never lit that fuse. The twist at the end blew my mind. I never saw that coming. Stella left me totally creeped out!

Stella is soft core horror, I just wasn’t expecting that.

I found no significant proofing issues.