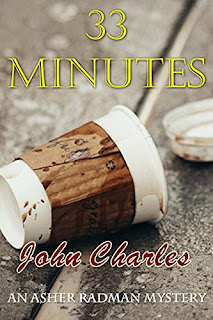 “It only took 33 Minutes for them to die

Three dead, two in critical, but why?  One fact in common - all had purchased their morning coffee from the same place.  Were they the intended victims, were their deaths a cover to ruin the transgendered owner of The Coffee Stop, or were their deaths in vain?

Routine didn't exist for Senior FBI Agent Asher Radman.  He was highly respected and had proven himself with hard unsolvable cases.  To Asher, his job was his life.  Everything else slipped into the background as he worked to solve the impossible cases he was assigned

Despite intensive interviewing of coworkers who knew the victims, Asher was at a loss.  Who was the intended victim?  Was this the start of a serial killing spree?  Was there another reason why the killer poisoned only the regular coffee in The Coffee Stop?  And how did the killer get the poison into the pot of coffee?

To complicate matters, Kyle, his long-term lover had professed his undying love that very morning.  His emotions were running high, but his love for Kyle would have to be put into the container where he held all his personal passions while working a case.  There would be time for him to open that box.  It just wasn't now.”

John Charles has a bunch of books available, some romance, some mystery, and all appear to have gay protagonists. You can find out more including a list of all his books by visiting his website.

33 Minutes is a fairly short, but still satisfying and entertaining read. The main story, the case that Asher, our protagonist who is an FBI agent is trying to solve, is interesting as the reader tries to put together the pieces. Kyle, Asher’s long-time boyfriend decides he’s ready to take their relationship to the next level which makes Asher happy, but as with all change also adds a little stress to life. This is a series, so those who find they like the character of Asher will have more opportunities to read about him. In fact, at this point it looks like the second book is available.

Definitely some language and adult situations. If you’re homophobic, this wouldn’t be the book for you either.

My review is based on a pre-release ARC (advance reader copy) and I can’t gauge the final product in this area.