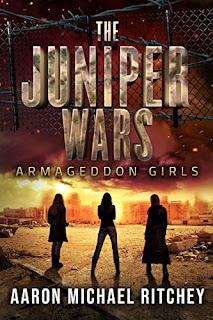 “It is the year 2058. The Sino-American War has decimated several generations of men, and the Sterility Epidemic has made 90% of the surviving males sterile.

I generally don’t read dystopian stories, but the premise of this one grabbed my attention. The characters are all well-developed, quite unique, and interesting. This is going to be an epic coming-of-age saga contrasting two disparate worlds existing side by side. Aaron Michael Ritchey has done an outstanding job setting up his world and has kept it as realistic as fantasy can get while still pushing the limits of reality with the elements he employed.

Armageddon Girls is the first book in The Juniper Wars series.

I read and reviewed from an advanced readers copy, so can’t really comment on editing.

I loved this one and book 2. I never did get around to reading book 3. I need to fix that.