Welcome a new Pal to the Books and Pals' team with his first review. 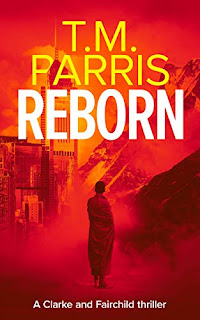 Disgraced ex-MI6 operative Rose Clarke is given the chance to redeem herself by tracking down John Fairchild, an independent dealer in information believed to be selling British secrets to the highest bidder. But Fairchild’s motives are unclear, and as Clarke tracks him through Hong Kong, China and Tibet, another story begins to unfold.

"A history graduate from Oxford, T.M. Parris has earned a living teaching English in Budapest and Tokyo.

Her first career was in market research, during which she travelled extensively to numerous countries and had a longer stay in Hong Kong which involved visiting many of the surrounding countries. She has also taken sabbaticals for a road trip in the USA and to travel by train from Brighton in the UK through Russia and Mongolia to Beijing and around China to Tibet and Nepal.

More recently she has played a role in politics, serving as a city councillor in Brighton and Hove on the south coast of the UK.
She currently lives in Belper, a lively market town near the Peak District National Park in the centre of England.

She started writing seriously in 2011. She published her first novel, Reborn, in 2020 and is the first in a series of international spy thrillers, She is drawn to international settings and the world’s most critical and life-threatening political issues, as well as the intrigue, deception, betrayal and secrecy of clandestine intelligence services.

Crime and action thrillers are her favourite books, film and TV choices. She enjoys walking, running, cycling and generally being outdoors in beautiful countryside, as well as cooking and baking and, of course, travelling.”

T.M. Parris’s Reborn definitely hits the ground running. From its first scene – a shootout in a Hong Kong restaurant – to its suspenseful closing pages, there is not a slack moment, and there are enough fight scenes, escapades, thrills and suspense to keep your typical thriller reader turning the pages. This is all very nicely done, and the frequent action scenes are both believable and well put together.

However, the book is more than just a thrill ride, and the action is backgrounded by the cultural colour of a string of far-flung locations (far flung to me, anyway!): Hong Kong, China, Nepal and Tibet. All of these feel well researched, and anyone with an interest in in the East – and in travel in general – will find these places painted with a confident and no doubt well-informed hand (judging by the author’s declared love of travel and familiarity with these areas). These provide background to an intriguing and cleverly constructed plot which eventually draws our two protagonists into the struggle of a group of dissident Buddhist monks in Chinese-occupied Tibet. Here, there is some careful and knowledgeable handling of Buddhism, together with a nuanced view of the political situation (with understandable sympathies for the Tibetans), all of which helps elevate the story above your run of the mill thriller.

The characters are well drawn with relatively good psychological depth and enough shades of grey to make them interestingly unpredictable, though personally I would have liked more of this. There are a few elements of both protagonists’ backstory that provide some relevant impetus to the plot, but which I felt could have been introduced or hinted at earlier on. The dialogue and description are good and unfussily workmanlike (without being sparkling), and the spy talk and “tradecraft” of the world of espionage seem believable without rivalling Bond levels of ingenuity.

Overall, a great first instalment to a promising series, of which I look forward to reading more.

A very small number of typos and no significant issues.

Welcome, Gareth Southwell. It's great to have you here.

Thank you! Great to be here!

Welcome to the team, Gareth :-)

Interesting book - TM turns out to be a female author. So much for 'girls can't write thrillers'! Am sampling ...

Thank you! Yes, it was an interesting read. The others in the series look interesting, too, especially the one in Japan. And girls can write anything they want, surely. :)