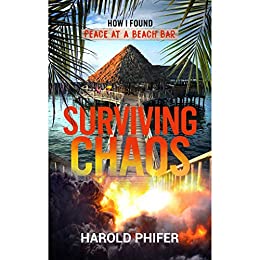 “For more than fifty years, Harold Phifer's childhood living conditions remained a secret, even from those who thought they knew him best. No one knew about his past growing up with a mother who suffered from mental illness; a greedy, controlling aunt; a mindless and spoiled older brother; an absent father. It wasn't until an explosion in Afghanistan that his memory blasted back into focus. This book is the result of a long, cathartic chat with a stranger at a beach bar, where Harold finally found some peace.”

“Harold Phifer was born and raised in Columbus, Mississippi. His first twenty-five years were spent entirely in his home state. After graduating Mississippi State and Jackson State Universities, he became a highly specialized air traffic controller, living and working as an international contractor serving numerous tours in Iraq and Afghanistan. Surviving Chaos is his second book.”

As I’m sure I’ve said before, one of the things I like about memoirs is to take the opportunity to compare my experiences to the author’s. I’ve read memoirs of authors who grew up in the same environment as I did (even the same town in one case) with a comparable family situation, roughly the same time frame and at least some of the same experiences. These provide value to the reader in various ways, possibly giving them a different perspective on some of their own life experiences.

However, other memoirs are much different. For example, in this one the timeframe Harold Phifer, the author, was growing up was just a few years behind me and in the same country. Beyond that we have virtually nothing in common. Many people gauge their opinions and reactions to the actions and decisions of others based on the assumption that everyone had the same basic experience and background as they do, because the majority of those around them did exactly that. Reading about someone with a vastly different experience, like this author’s growing up years, should drive home the fact that everyone’s experience wasn’t the same. Not everyone had the same expectations placed on them, support in reaching their goals, or good role models around them as examples of what to aim for.

Reading about Harold’s childhood drove home how lucky I was, but in a way that was interspersed enough with humor that it wasn’t a constant downer, which it could have easily been. It was an entertaining, mind opening, and educational read. Not a typical combination.